It's Been ROUGH Around Here

Dom's neuropathy has gotten so bad that he's now in a wheelchair.  He can't feel his feet.

A dear friend, Richard McM came over to build a wheelchair ramp for him.  Unfortunately, Dom is using my dad's old wheelchair-  probably 30 years old and HEAVY.  I can barely move it into my car.

On Wed., we had an appointment with Dr. Safah at Tulane.  She's going to arrange for a few weeks of physical therapy to get him walking again, then putting him back on a different chemo. She said that besides the neuropathy, his muscles have atrophied after a couple months of inactivity.

We came home very hopeful-  feeling positive- happy to be back with Dr. Safah.

We stopped to get some food to go on the way home.

Dom went to bed after eating.

I noticed that there was a message on the answering machine.

It was Dr. Safah's nurse telling us to get to an emergency room IMMEDIATELY.  His sodium was "critically low" at 120.  (Hyponatremia)

The ER doctor told me to go home, as he would be admitted.

They finally put him in a private room at about 10 pm.  By that time, his sodium had dropped to 119.

They pumped him full of sodium and released him last night once he reached 130.

Got home around 7:30 pm.  He fell TWICE last night using a walker.  He cannot feel his feet or calves.

So, now I'm working on getting him a wheelchair.  Hoping that Tulane will do it.  He called our VA Rep this morning, and she said that if he got an appointment with the VA  (ha-ha), they'd pay for it.

I'm waiting to hear from Dr. Safah's folks to obtain a lightweight wheelchair that I can lift for him.

Thanks for your continued prayers.
Posted by Dom and Nan at 12:19 PM 3 comments:

A Fun Week with My Big Brother

Brother Ric flew down from Ohio for a week to visit.

It was non-stop fun.

Took him to 4 local joints for seafood, burgers and beers.

One day, Richard McM brought a young guy over to Weed-Whack for 6 hours.  Dennis, Cheryl and their adorable little dog, Maggie joined us, too.  Dom and Ric went into Bogalusa to get a lot of Popeye's Chicken, dirty rice, red beans/rice and biscuits.

Friday was Dom's 72nd birthday, so Ric took the 3 of out for delicious steaks.

It was so sad to see him go home on Saturday. 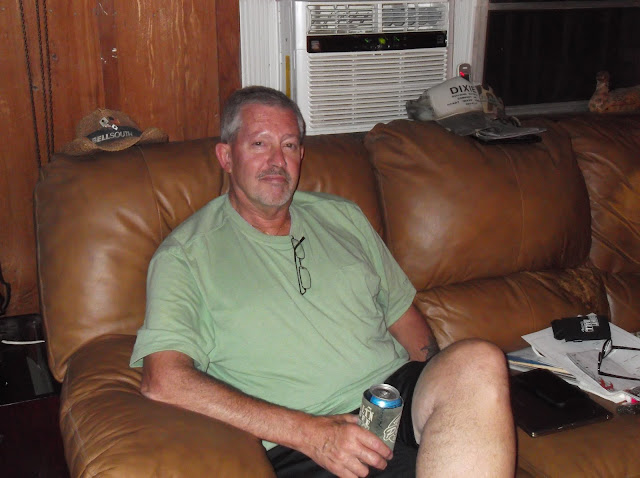 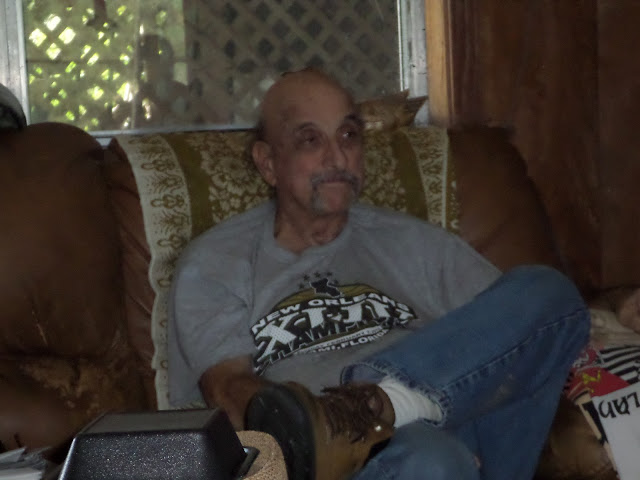 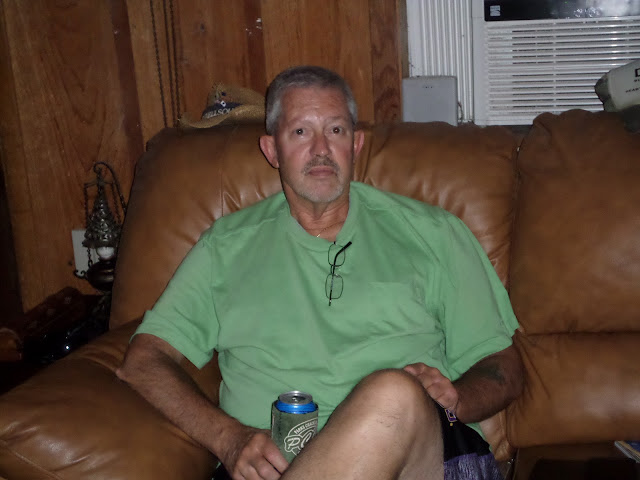 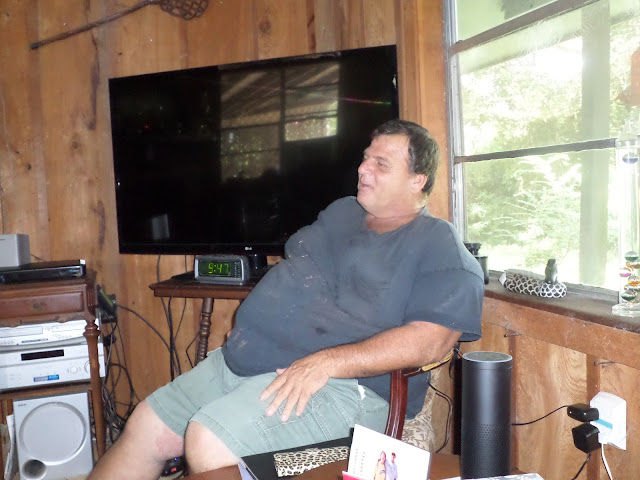 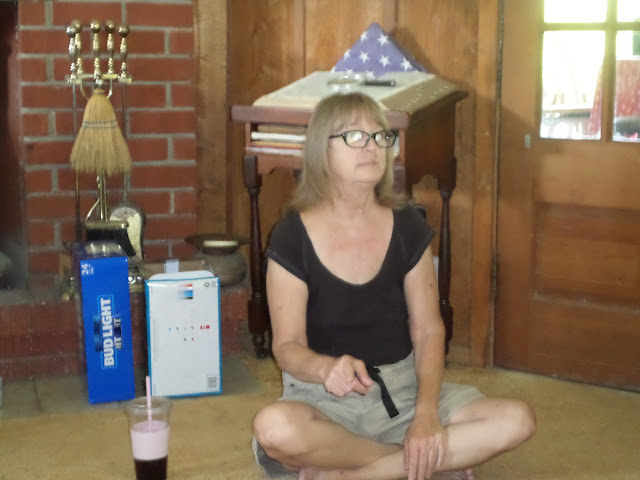 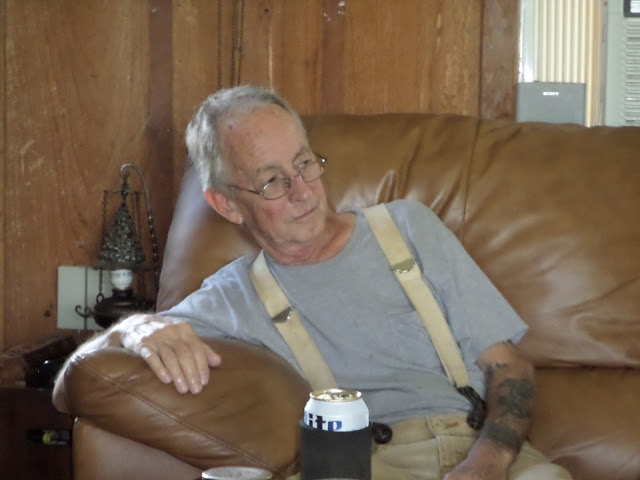 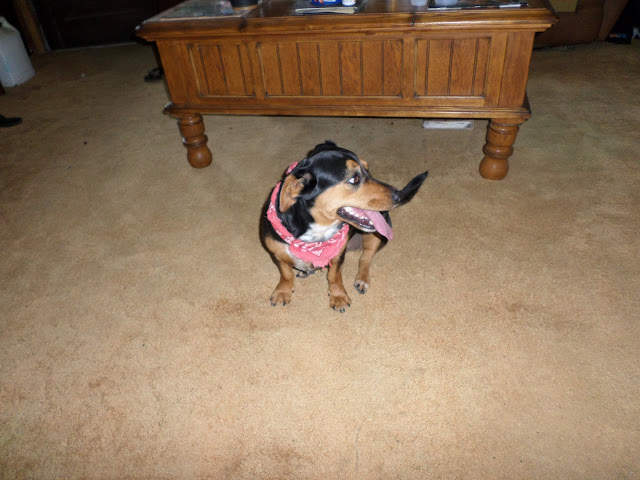 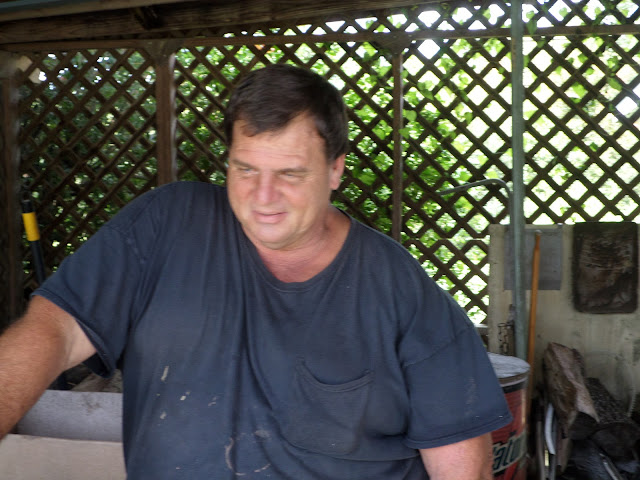 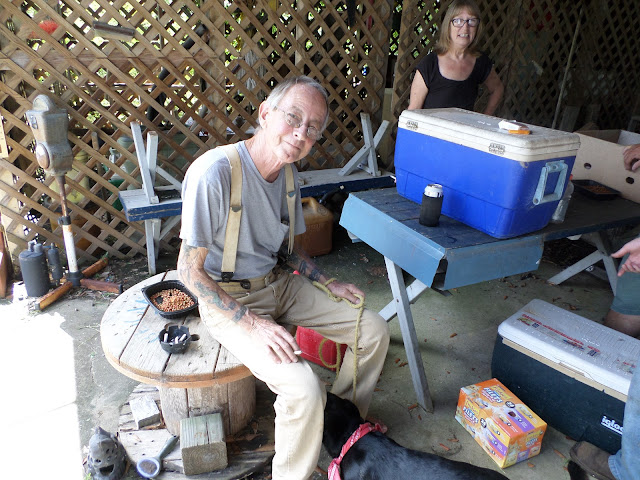 Dom is a Hurtin' Little Cowboy

Well, gang-  This Velcade/Revlimid treatment has really clobbered him.

Over the course of 8 days, he was admitted to 2 separate hospitals overnight.

His neuropathy started traveling up his legs, just below the knees.

He gets extremely dizzy and almost falls down.

Blood Pressure is either very low or slightly elevated.

He's now walking with a walker.

His hands are starting to go numb.

So, his Slidell Oncologist took him off of Chemo.

We'll be heading to Tulane Cancer Center soon.  We have an appointment for the 31st, but they'll probably want him in there sooner.

(Thalidomide was like a walk in the park compared to this treatment!)
Posted by Dom and Nan at 12:18 PM 3 comments:

I just got a call from the Slidell Cancer Center....

The pain in his right hip is probably a pinched nerve.

The LEFT hip has improved!  (Maybe the Zometa is working already)

Music to our ears!

(Our patient has been in bed all day, but hoping he'll perk up in the morning.)

Thanks for the continued prayers, gang!
Posted by Dom and Nan at 4:31 PM 1 comment:

A Dom Update - Bed during the weekend, then back at it.

He had been feeling very weak and woozy since last week.  He basically spent the weekend in bed.

On Monday, we headed into Bogalusa to have his weekly blood work done.  I dropped him off at the door to shop and returned to find out that he couldn’t make the walk to the lab.  They kindly gave him a wheelchair.

Yesterday was a FULL day.  He had an MRI appointment at 11:30 at the hospital.  Then, the Cancer Center nurse asked us to come right over.  She had looked at his blood work to see that his Potassium was way down.

So, he got his Velcade injection, followed by a 2-hour infusion of Potassium and liquids.  (Saline)  Our Oncologist was on vacation (again), so one of his associates gave him a prescription for daily Potassium supplements.

He felt GREAT this morning.  Got out of bed, made his own breakfast, watched television, then got up, started to walk and got dizzy.

There’s no doubt that his blood pressure dropped and he was too much in a hurry to get moving.  So.... he’s promised me that he will sit for awhile.  Slowly stand for awhile.  THEN walk.

So, this is all very frustrating, but we seem to be getting somewhere with the Potassium and Fluid infusions.  And happily, there seems to be a better communication with his health care team.

Back to the Cancer Center on Friday morning for Velcade, then he's got the next week OFF.  YAY!
Posted by Dom and Nan at 1:31 PM 1 comment: