We Had Quite the Morning

We had quite the morning.  We saw Dr. Mannina the Radiology Oncologist at 8:30.

He informed us that Dom had broken ribs on the right, new lesions on the left, and a large lesion on his right hip.

A year or so ago was when Dom had a Plasmacytoma on his right hip.  That's when he fell out of an 8-year complete remission.

So, here's the plan:

We go in Tuesday afternoon to get measured for a contraption that will hold Dom's arms over his head.

He'll get about 30-minute sessions when they're ready to get started.  Dr. Mannina is going to blast the hip, and "graze" both sides of his ribcage so as not to affect any internal organs.

He sent us downstairs for Dom's 8th Darzalex infusion.

When we arrived at the infusion center, the gang had Dom all set up in his favorite "corner office".  A lot of room and not sitting on top of anybody.

The volunteer already had our Diet Cokes, candy bar, pillow and blanket waiting for him.  This guy, Richard is a DOLL.  His wife is currently getting treatment for Breast Cancer, so he knows all too much about the ups and downs of treatment.

Our nurse cleaned his port and started the steroid infusion.

After consulting each other, the 2 doctors didn't want any Darzalex in his system for next week.

Sooooo...  Fitting on Tuesday, then 10 Radiation Treatments, THEN back on the Darzalex.

As you guys all know, the Radiation works wonders for pain, so we're happy to get started.

ONE THING AFTER ANOTHER.  *groaning*
Posted by Dom and Nan at 12:59 PM No comments:

Dom's in a LOT of Pain

He had a full body bone-scan done a couple of weeks ago.  Images below are showing his "hot-spots".  Breaks, cracks or lesions.  It's showing the bones attempting to regenerate.

The first image below is untouched: 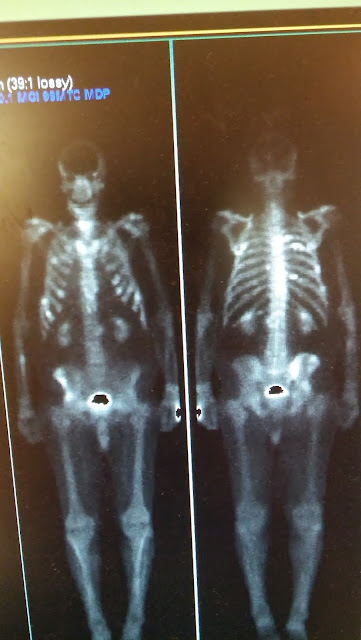 On this image I circled his "hot-spots": 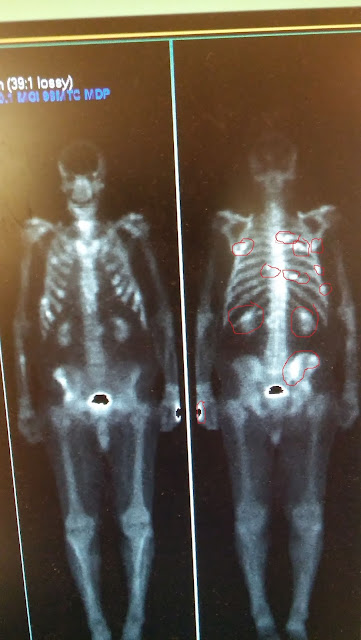 We think that all of these broken ribs are a result of the 10 radiation blasts on his C-3 Disc.  They caused his throat to close up.  THEN the coughing began.

His ribs were already weak from lesions, and the coughing snapped them.

They did an MRI on his right hip after consulting an Orthopedic Surgeon.  The guy wasn't concerned that this would cause Dom to fall, as the hot-spot isn't in the socket of his hip.

We're guessing that it's a new lesion.