We're waiting for Federal Express to deliver the LEUKINE.  When that happens (prior to 4:30 pm), I'm to call Camillia Home Healthcare in Picayune, MS.  They'll send a gal out to coach me again on the injection, and possibly set up some type of schedule to flush out his line.

Today has been a busy day of making calls and trying to get organized.

On Monday morning, we're heading back to Tulane Cancer Center for blood work.  They're going to see how his stem cells are behaving.  If they're at the right "cycle" (they'll ebb and flow in number), they'll collect them.  If not, we'll have to return on Tuesday or Wednesday.

Dom spent Tuesday and Wednesday night at Tulane for the "mobilization" process.

On Tuesday morning, he had outpatient surgery.  They put a "central line" in his chest, underneath his collarbone.

He was immediately moved up to the Bone Marrow Transplant Unit.  Took a chest xray to be certain that the line was in the correct place.  (As it turns out, it was about 1 inch too deep, and had entered his heart).  Then, they gave him CYTOXAN for 9 hours.  This was the "conditioning chemotherapy.  Along with that, they gave him a 24 hour drip of MESNA, which is a drug that protects the bladder from bleeding from the chemo.

When I had spoken to Dom from Linda's house at about 9:30 pm, he felt great.

I got to the hospital around 9am to see that he was a mess.  He was up all night.  Nuaseated.  He tried to force himself to eat a little breakfast.   The little bit of scrambled eggs that he forced down turned into flying projectiles.  This nausea lasted for most of the day.  His fingers and toes got cramps.  And get this....  he was "hallucinating" the night before.  (Tuesday Night)  Every time that he'd close his eyes, he'd see faces, things melting, etc...  sounded like a bad acid trip.  So, the poor honey stayed up all night watching TV, so as to avoid the mental images.

Eventually, the nausea subsided (with the help of ZOFRAN), but he still did not eat anything all day/night.  (picked at a hamburger for dinner).

I arrived at Tulane at 7:00AM to find him sitting in a chair watching tv.  He felt GREAT.  Had eaten half of his breakfast!  What a flippin' relief.  Christ, I was happy to see him smile.

One of Dr. Safa's "fellows" came in and pulled his central line out of his chest by about 1 inch.  When I asked him if the line in his heart might create problems for him, he assured me that it was no big deal.  A small tube would do no damage.  Told me to imagine the size of a pacemaker that is inserted in the heart without problems.  So.... that was good news.

Dom will be getting daily injections of LEUKINE.  This is the drug that moves the stem cells from the bone marrow into the blood stream for collection.  They showed me how to do it.  (very much like an insulin shot-  I can just poke him in the gut!)

They finally got around to discharging him sometime after 2pm.  (He was fully dressed and ready to blow out of there at around 8:30 am).

During the day, they lined up Home Health for us.  The gals will "flush his line" and re-dress it every few days.

Along with his discharge papers, he was given 3 new prescriptions:  CIPRO (an Antibiotic), ACYCLOVIR (an Anti-Viral) and FLUCONAZOLE (an Anti-Fungal).  Apparently within 7 days, Dom's immune system will be compromised.... thus these drugs.

Dom is Safe and Sound at Tulane

Just a quick note. We spent the day at Tulane. They surgically put a "central line" in his chest. He's now resting comfortably in the Bone Marrow Unit.

They would not allow me to spend the night, so I'm 11 miles away at dear friend, Linda's house for the night.

When I got here, I called to check in with him. They were starting his first dose of Chemotherapy..... apparently 3 hour drips four times. Also a 24 hour drip that protects his kidneys (???) bladder(???) from bleeding. This is all so overwhelming.... I should have been taking notes.

Once again, Tulane Medical Center KNOCKED US OUT. Geez, these people are great. (Almost TOO thorough!) His nurse/assistant, Teresa and Bao are out of this world.

Not being familiar with chemo, I asked them when side effects would/could possibly kick in. They said that everyone is different.

Will get an early start and spend the day with my love tomorrow. Sipping on a cold beer that tastes AB FAB! Love to all of you.

We spent a long, long day at Tulane yesterday.  They took 14 vials of blood from him at the Cancer Center, then met with us for about an hour and a half, then sent us across the street to the Medical Center for a zillion tests.

I couldn't get over the people wearing masks!  We see that alot at the cancer center, but the hospital itself was loaded with posters about the swine flu.  Saw ALOT of 4-10 year old kids with masks, having chest xrays and pulmonary function tests.  I have to wonder if they were testing for swine flu.  One mother with two toddlers came all the way from Hattiesburg, MS.  (An hour NORTH of us!).  Kinda Creepy.

So.... this is what we're finally looking at:

He'll go off his Coumadin and Thalidomide next week.

A two night hospitalization right after Memorial Day.  He'll get "mobilized" (the line in his chest for meds and transplant) by a surgeon.  Then the "conditioning" starts.  There will be a 24 hour drip of Chemotherapy.... "CYTOXAN".  24 hours later, they'll be giving him the 1st of 5 daily doses of a drug called "LEUKINE".  This helps draw out the stem cells from the bone marrow, moving them into the blood stream for collection.

Then, we'll be back to the Cancer Center around June 1st for a complete blood count.  If they see enough stem cells, we'll move on to collection.  Otherwise, stay on the Leukine a few more days.

I was up until 2am reading about these drugs and their side effects.  It's literally CRINGE-INDUCING.  *groaning*

Anyway, as it turns out, Dr. Safah is Lebanese.  She's headed to Lebanon for the entire month of June to visit her parents.  They said that we could do the transplant with another doctor, but we're comfortable with her.  So, we're looking at JULY for the actual transplant.

Before we left, Dom had to sign alot of paperwork.  Legal disclaimers about mortality rates, gloom and doom.  We asked if there was ANY question about doing this.  Nope.  Without it, he'd be dead in less than 5 years.

She went on to say that nationally, with this "Clinical Trial", the mortality rate is 8-10% from complications after the transplant. (infections)

She, on the other hand has lost only 2 patients in over 100 transplants.

Have a great weekend, guys.

Sunday with Skeet. Tomorrow at Tulane. 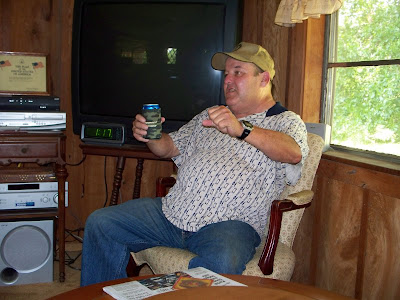 Had a pleasant weekend.  Skeet came over on Sunday.  He was a birthday boy on Saturday (60), so I made a nice spread of Mexican food for him on Sunday.

We had a really nice visit, a good dinner, and sent him home with food for his elderly mother.

Tomorrow, Thursday, is our big day at Tulane.  Dr. Safah at 9 am, and then out-patient tests all day long.

I'm going prepared with a book and a pack of smokes.  I'm hoping that they'll give us some type of tentative schedule tomorrow.  I'd really like to touch base with the apartment management, the dude who is going to sanitize, cable company, electric company, etc.  Man.... it's going to be alot of busy-work.  But, shall endeavor to persevere! 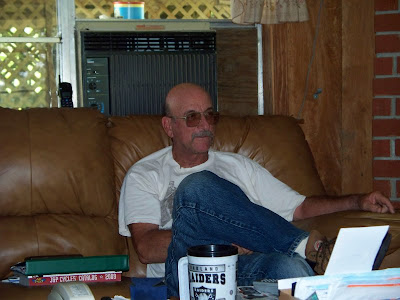 A Message from Above? 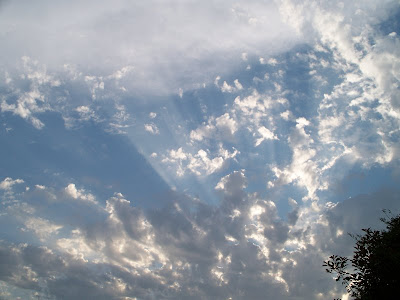 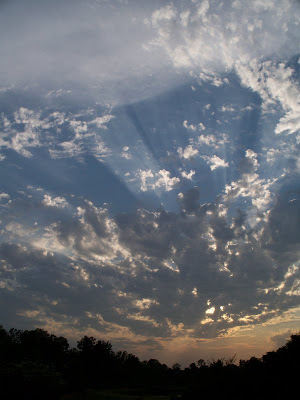 I've never been "religious", gang.  Have always tried to live my life as a "Christian" would.... the whole "do unto others" thought process.

Now, as I get older, I'm becoming more spiritual.  Have buried both of my parents, have seen friends die, and now my husband of 20 years is in the battle for his life.

That makes one certainly question the whole "GOD" thing.  Actually, it's like an icepick in the forehead!

As we were coming inside for the evening yesterday, Dom pointed at these cloud formations.  We were both in awe at the beauty.  It looked absolutely heavenly.  I took it as a sign of good things to come.  A gentle nudge from above-  to look up-  to have faith... things are going to be fine.  Rays of hope.  It felt good. I felt more spiritual than I have in my life.

Wanted to share these pictures and my thoughts with y'all.

I'm guessing that they'll also put him on the medication to draw the stem cells out of his bone marrow and into his blood stream for collection.

Wow.  It's really happening, gang.  Kindly continue with the prayers and good wishes.  We appreciate them more than you know.

We Had a Good Week

Chris came over last Saturday morning.  We hired a driver to take the 3 of us to the L&C for the day.  Dear friend, Richard McM works there on Saturday.  The usual suspects were there, and we all had a grand time.  Chris might have found "the one".  :)

Our only medical day was Thursday.  Dom had his 2 hour Aredia Infusion.  Thankfully, it didn't wipe him out, as it normally does.  He sprang out of bed by noon on Friday!

Got the good phone call from Culasso's gal on Friday.... full speed ahead.  Now the ball's in Tulane's court.

Yesterday, Saturday, Dom and I did some running around in Bogalusa.  Stopped at the bar for 2 beers.  Decided that I liked "Pioneer of the Nile" in the Derby.  Didn't the bugger come in 2nd place!  What a race!

Happy Hour buddy, Skeet, turns 60 next Saturday.  We're having him over for a "FIESTA" on Sunday..... guacomole, salsa/chips, black beans, chicken-cheese-onion enchiladas, mexican eggrolls, and perhaps some flan.

Have a great week, my friends/family!  We love you.  Keep up the good vibes/prayers....it seems to be working! 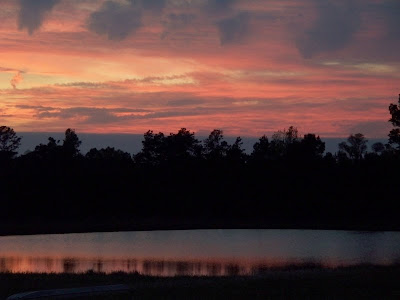 Got a great phone call from Dr. Culasso's office on Friday.  Both his Brain and Heart out-patient tests from last week were fine.

I called Tulane Cancer Center to tell them, but wouldn't you know it..... both Dr. Safah and Amy were off.

Amy will be back tomorrow, so I'll give her a ring first thing.  Theoretically, Culasso's gal faxed them results and the "go ahead". (I say that because Culasso just moved his staff into his brand new location..... things must be chaotic)