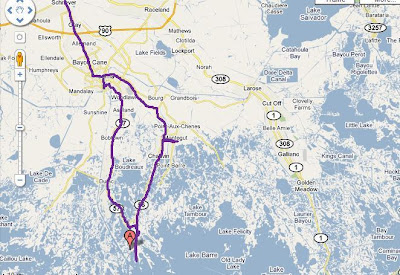 The usual suspects took Airline Hwy to Gramercy and crossed over the river via the Veterans Memorial Bridge.

Headed to Thibodaux via Chackbay and stopped for lattes at a Starbucks.

Stopped at the Mt. Olive Baptist Church in Schriever. Not much to look at. Catholic cemeteries are much more interesting... more BLING!

Continued South through Bayou Cane to Houma. Hopped on Hwy 56 and ran into a little joint in Point aux Chenes.... it was apparent that we weren't in New Orleans anymore... Cajun music playing, wonderful cajun food.... the place smelled heavenly.

Stopped at the St. Elie Catholic Cemetery circa 1846. Was delighted to find a lone CSA (Confederate States of America) gravesite.

Crossed Hwy 58 to Montegut and drove South along Bayou Terrebonne to Dugas Cemetery... circa 1700s.

Back up to 58, headed West to 56. Drove South through Chauvin along Bayou Terrebonne. Drove along Lake Boudreaux and found the highlight of the day- The Elpege Picou Cemetery which was built on an Indian Mound from 1000 AD. Was delighted to see another Civil War grave.

A little history..... I had always assumed that Indian Mounds were burial grounds... and held some type of spiritual meaning. I found it creepy that graves would be put on these mounds. Not so- The Indian Mounds were basically garbage dumps.... oyster shells, old tools, broken pottery, etc. Eventually the elevated area was used to escape high water and also as an enemy look-out. History lesson over.

Continued South all the way to Cocodrie. Cocodrie translates to “crocodile”. There aren't any crocs here.... just alligators.... Henry (who knows EVERYTHING!) sez: “ I'm guessing the early explorers called 'gators "cocodrie" because that's what they were familiar with. They also thought raccoons were cats and to this day in Cajun raccoon is chaoui (chat, oui? Cat, yes? LOL)” BTW: Whatever he doesn't know, he lies about. Man, that dude is smooth!

From there, took a beautiful winding ride across Grassy Bayou Marsh to Dulac. Passed an occasional pirogue, but basically had the road, Hwy 57, to ourselves. Headed North to Dulac, riding along the other side of Lake Boudreaux.

Stopped at the Holy Family Catholic Church in Grand Caillou. I think that Grand Caillou translates to “Big Pebble”. There was a gorgeous tomb here. Handcut in the granite was a depiction of the Last Supper. It was painted in Ceramics and baked on. Beautiful, bright and colorful. Have never seen anything like it.

Back up to Houma taking Hwy 24 to Thibodaux. The joint that we wanted to eat at wasn't open until 5pm, so we ended up back at Spahr's. Good stuff. Good company. Great fun After lunch, we stopped at the Jean Lafitte National Park and Preserve.... got a kick out of the aggressive ducks. Nice spot.

On the way home, we stopped at a bar in Chackbay. They had a lemon tree that was loaded with huge fruit. The owner had told Beth last year that she could take as many as she could carry out of there. Unfortunately, the owner was not in. Beth wouldn't take 'em. Dunno who's more honorable....Beth or Henry. Hope that shit doesn't rub off on me! *Smiling*

Dropped Beth off, then Henry and I took our usual “long cut” home along River Road and the Bonnet Carre Spillway. Had a delightful day!