Well, gang-  It's started!  Things are going to be moving pretty quickly.

I just hung up the phone with the Transplant Coordinator.  She reports that Dr. Safah said that Dominic is doing "great", she's very pleased with all of his bloodwork, and as soon as she gets the go-ahead from Dr. Culasso (last week's tests), we'll be going full speed ahead.

This is what we've been waiting for, but suddenly, I'm freaked out.  Seriously.  It's a reality, or soon to be one.  *she types whilst breathing deeply*

I told her that I was concerned about the Swine Flu, as Dom will have no immune system.  Told her the timing really sucks.  She assured me that he'll be isolated for weeks in the hospital.  Isolated in the halfway house next to the hospital for a couple of weeks, and will probably have to wear a mask.

She doesn't want us going to events with alot of people or eating at buffets.

I said, "are you kidding?  We're going to isolate ourselves in Metairie.... we plan on being like newlyweds".  That delighted her.  So, we're on our way.

As soon as we hear from Culasso, we'll have them fax her the results.  And so it begins... keep Dom in your thoughts and prayers, guys.  Will update when I hear anything.

Wow.  Time seems to be flying by.  I'm glad that the weekend is upon us.  'twas a busy week.

We went into Slidell on Wednesday.  Spent hours at Northshore Hospital.  They concentrated on Dom's heart this time around.

He got an Echo Cardiogram.... similiar to an ultrasound.  Absolutely fascinating to see the chambers of his heart, his valves, etc.  Modern medicine is so amazing.

Finally, they attached a 24 hour Holter monitor on him, and we got the hell out of there.

Had a quick sandwich at Arby's, stopped by his ma's for a visit, then stopped to see the gang at the L&C on the way home.  Dom didn't get any sleep because of the monitor... has a hard time sleeping on his back.

Yesterday, Thursday, saw us going back to Slidell to return the heart monitor.  Three round-trip drives to Slidell this week @ 100 miles.....  300 miles.

After the hospital stop, we met Al and Ada at Los Tres Amigos.  Had the top down all day.  Had gotten up to 90 degrees here.  The 2 Sangrias really hit the spot on a hot day.  The food was delicious.  I wouldn't hesitate to return to the joint.  (Went to the one on Gause for the first time).

Awake at 5am.  Out the door at 5:30.  Signed in at the hospital in Slidell at 7am.  Dom had 3 tests scheduled.  They were concentrating on his brain yesterday.  He had a Brain MRI, an EEG, and a Carotid Artery ultrasound.

Finally got out of there around 11am, and headed to Bogalusa for our favorite Chinese Buffet.  (Nanette is embarassing at that joint....a real Miss Piggy.  I later complained to Dom that I "felt so full".  He smiled and replied, "You should")   *grinning*

Afterwards, we went to the L&C for a couple of beers with the daytime gang.  Fun place.  Great folks.

Home around 3pm, tired.  Then, didn't I have a bout of insomnia last night!  Geez.  Thankfully, today is a lazy day.  Then, it all starts up again tomorrow with 3 more outpatient tests.  *sighing* 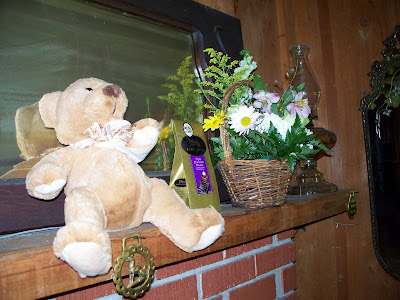 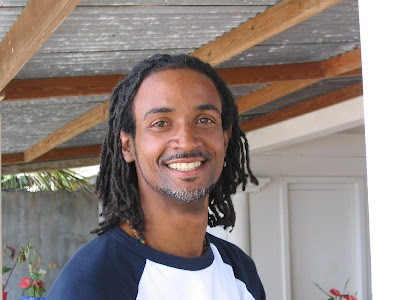 Wow, you guys!  Remember the beautiful flowers, chocolates and teddy bear from a couple of weeks ago?

It came from our dear friend, Levi Baron, from the island of Dominica.

Levi is a tour-guide who knocked our socks off.  We've been warm friends for a few years now.

Honestly... when the flowers arrived with no card, I had a gut feeling that it was from Levi.  Even asked the local florist who did the arrangement.  (He didn't know).

Just found out via email that it was our dear Levi.

Please, folks... if any of you are cruising/vacationing on Dominica, let me know.  Levi will show you a helluva-good-time! 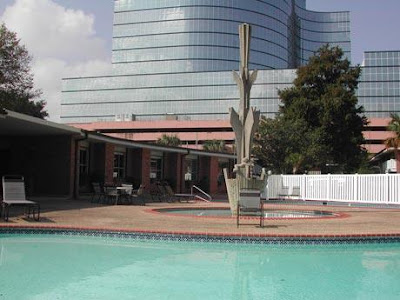 "Hi gang!   We had a great day today.  Called up the GATEHOUSE APARTMENTS and headed across the lake to look at a couple of 1 BR units.

Loved the complex.  Loved the staff.  Loved the floor plan of the smaller of 2 offered.  Great vibes throughout the time we were there.

Dom and I will be very happy there!  Our gal, Sherri, was a doll.  Told me to give her a call when we're ready, and she'd hold a unit for us for up to a month.  Perfect!

Afterwards, we drove over to Chris' house, only to find that he wasn't at home.  So, headed back to the Northshore for lunch at The Times Bar and Grill in Mandeville.  Good stuff.

Put the top down, and cruised home.

Both of us feel really good about this property in Metairie! 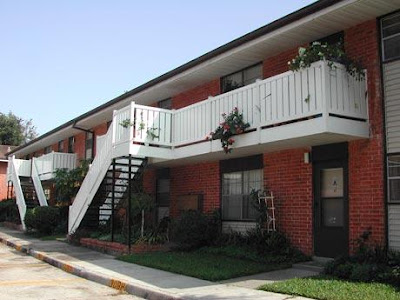 We had a rather low-key weekend.  Pleasant, but mellow.

We did nothing out of the ordinary on Good Friday.

On Saturday, Linda and Paul came over for a few hours.  We had a really nice visit.  They were playing disc-golf in Poplarville, so stopped here on their way back to Metairie.  Dom had picked up a box of Popeyes, so we were able to feed them.  *smiling*  It was the first time that the boys met, and it went very well.

Yesterday, Easter Sunday, Dominic felt bad.  He got out of bed just long enough to eat my gourmet dinner.  He was extremely TIRED.  Today, on the other hand, he feels great, and has been puttering around the property.

I cooked a FABULOUS boneless leg of lamb.  Smeared olive oil, sliced green onions, alot of roasted garlic paste, thyme and lemon juice on it, then rolled and tied up.   Oh God-  It didn't even need mint sauce, but I used it anyway....out of habit.

That's about all I know.  We're heading into Metairie tomorrow to take a look at the 1 bedroom apartments at the Gatehouse.  If it's a nice day, we'll probably take the Vette.....finishing the day with a visit to Chris' house.  Looking forward to both things!

Yesterday was absolutely exhausting.  We headed into Sli-Dull bright and early.  This morning, Dom and I decided that we had made 18 stops.  (His maw, shopping, taxes, doctor...... happily, our last stop was the L&C in Bogalusa for a couple of ice cold beers).

We spent quite a bit of time with Dr. Culasso.  He scheduled 6 different outpatient tests at Northshore Hospital to do a "Syncope Work-Up".  (Dom's 2 fainting experiences).

On Monday, April 20th, they'll concentrate on his brain.  He'll have a Carotid Artery Ultrasound, a Brain MRI, and an EEG.

Then, on Wednesday, April 22nd, they'll concentrate on his heart.  He'll have a Stress Test, an EKG, and they'll put a 24 hour Holter monitor on him.

Then, back to Slidell the next day to return the monitor.  I'm tired already just thinking about it!

Asked the good doctor what his gut feeling was.  Very likely could be dehydration.  When I mentioned that there may be a problem with his blood pressure medication, he gave me a wave of dismissal.

Went on to stress the importance of these tests, drawing a parallel between Dom and  a "plane ready for takeoff..... any weaknesses will cause a crash".  Also compared him to an old piece of wood....dried up, rather than young and full of moisture.  Suggested Dom drink a glass of water in between beers.

As you can probably tell, we adore this man.  Love his bedside manner.  Always hugs and kisses.  Amusing analogies..... rather than say, "You're getting old", he'll say, "You're growing up".  Love the man.  OK....enuf gushing about Miguel Culasso, MD.  *smiling*

The word for today is relaxation.  Didn't even get out of bed until 11am.  Heavenly!

Politically Incorrect- I love this!

It has just been reported that the head gardener at The White House has been dismissed after 28 years of loyal service to many US presidents.

When interviewed the gardener protested his innocence and said, "All I did was ask the Secret Service if anyone had seen the spade and the hoe".

As expected, things are starting to happen.

Yesterday, we met with Dr. Safah and Amy, the Stem Cell Transplant Coordinator.  They ordered more blood work and filled us in on their tentative plans.

After they see Dom's bloodwork from yesterday (assuming his Myeloma Cells are gone), they will meet and make up a "calendar".

Amy will then take over, ordering the following tests to be done at Tulane:

*10 vials of blood to check status of kidneys, liver, lungs, bone marrow and any infectious disease.  *Chest x-ray   *Pulmonary Function Test  *EKG  *MUGA (measures heart function) *CT checking to make certain there are no new tumors  *Bone Marrow Biopsy (making certain all malignant cells are gone)  *Meeting with Psychologist to make certain that he's emotionally ready for this  *Meeting with Social Worker to make certain that he has a support-system....me   *Central Line will be put in his chest by a surgeon for collection of stem cells, chemo, IV and finally implant of stem cells

His transplant MUST take place within 30 days of these tests.  Otherwise, it'll all have to be done again.

One thing MIGHT throw a wrench into the plans.  Dr. Safah was quite concerned about Dom's "SYNCOPE" episode at the Hard Rock Casino.  Wants our Dr. Culasso to do a "SYNCOPE WORK-UP" on him.  This will entail a cardiologist, no doubt.  We have an appointment on Wed. afternoon with our dear Doc. C.

Here's what Dr. Nanette has come up with.  The 2 fainting episodes were almost identical:

Alot of SUN during the day, followed by a bunch of beer, on top of blood pressure medication that has been known to sometimes goof up the heart and it's pumping of blood.   (Just found that on Web MD)  I don't believe that there's anything wrong with his heart.  The scenarios were the same.  Time will tell.