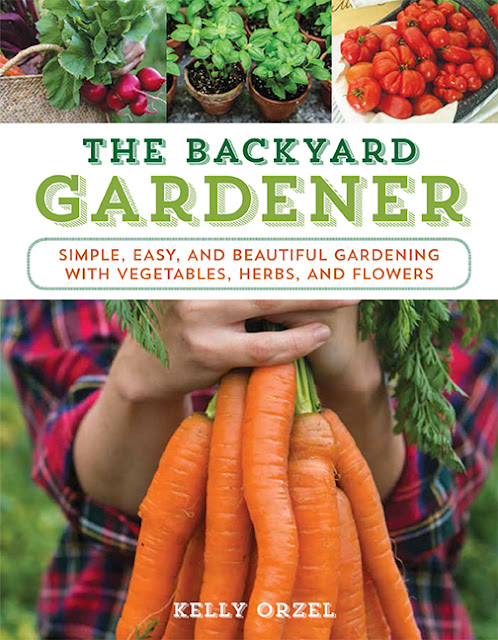 I received this book from the publisher.  It's a very nice large paperback...  glossy.... full of photos.  256 pages.  This is a very nice publication and one that I'll refer to often.

A beautiful and simple guide to edible gardening The "garden to table" movement is inspiring another generation of gardeners but many of them have questions. How important is composting? Is seed saving really worth it? Focusing on sustainable, organic growing practices and plants, The Backyard Gardener is a comprehensive handbook that will help get them started. Kelly Orzel covers everything from soil selection to growing and harvesting. Sidebars such as "garden center survival tips" offer useful advice to help readers build their confidence and know-how. This guide also features photographs of beautiful plant bed designs, propagation techniques, and much more.

Focusing on sustainable, organic growing practices and plants, The Backyard Gardener is a comprehensive handbook for everyone who wants to grow their own vegetables, herbs, and flowers in their own backyard. With beautiful photographs, planting suggestions, and tried-and-true techniques, Kelly Orzel will cover everything you need to know about:

Raising the healthiest vegetables
Controlling pests with homemade remedies
Starting and saving seeds
Maximizing the space in your garden
Making the best compost
Enhancing your vegetable garden with flowers and herbs
And so much more!

Get it on Amazon HERE
Posted by Dom and Nan at 12:45 PM No comments:

Welcome to the Farm How-To-Wisdom from the Elliott Homestead

Hi gang.  The publisher sent me a copy of this book.  It's a beautiful large glossy paperback (7.5 x 0.8 x 9 inches) full of color photos.  Over 300 pages.  This publication is loaded with info on gardening and small farming.  I have really enjoyed it and will use it often.  In fact, I'm going to start my own seeds for the first time next year....using these tips! 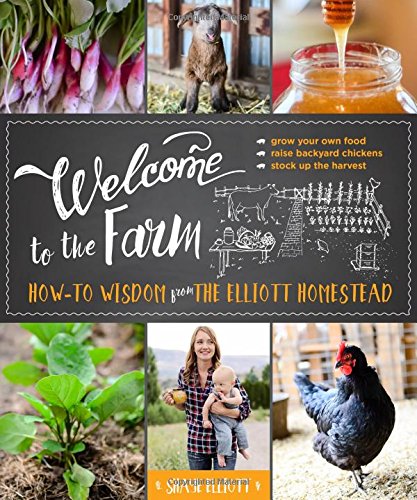 A fresh, new guide to the backyard lifestyle

The homesteading movement is continuing to grow, as more people are stepping up to have a hand in where their food comes from. Whether you want to dabble or immerse yourself completely in the do-it-yourself, back-to-basics lifestyle, Welcome to the Farm is a comprehensive, fully illustrated guide to growing the very best food right in your own backyard. Shaye Elliott takes readers on a journey that teaches them how to harvest baskets full of organic produce, milk a dairy cow (and make butter), plant a homestead orchard, can jams and jellies, and even raise chickens and bees. From her experience running The Elliott Homestead, Shaye provides all the how-to wisdom you need to know about:

*The benefits of a home garden
*The basics of seed starting
*Building your own greenhouse
*What belongs in the winter garden
*Canning, freezing and dehydrating
techniques and recipes
*The pros and cons of caged vs. free-      range chickens
*Keeping a dairy cow and what to do
with all the milk
*Raising animals for meat
*Making your own cider and wine
*And so much more!

Welcome to the Farm is aimed to serve homesteaders and urban-farmers alike, guiding them through the beginning stages of small-area farming and utilizing whatever amount of space they have available for optimal and delicious food production.

About the Author
Shaye Elliott is the founder of the blog, The Elliott Homestead. She is a beekeeper, avid gardener, and spends much of her summer preserving a variety of foods for the winter larder. The Elliott Homestead currently reaches over 100,000 unique visitors each month, averaging around 300,000 page views per month. Shaye lives with her family in the Pacific Northwest.

Get it From AMAZON
Posted by Dom and Nan at 3:18 PM No comments:

Our Progress Report- So Far So Good

We've had a busy couple of weeks.  Today Dom completed his 5th radiation treatment on his left hip.  Only 5 more to go.

We're meeting with a gal at the Slidell Cancer Center on Monday to discuss medications and insurance.

His last radiation treatment will be next Tuesday, then we have an entire, much needed, week off.

Meeting with his Slidell Oncologist on June 1st, where we'll learn about his Chemotherapy schedule.

After radiation this morning, we dropped off the oncologist's letter stating that his cancer had returned to our local Veterans Services Officer.  She's a doll...the same gal that took care of us in '08.  She felt confident that he'll receive 100% disability from the VA.  They'll be in touch to set up an appointment with one of their doctors.  I just hope that it happens AFTER we get more information on June 1st.

So-  Things are happening very quickly.  Our patient looks and feels great, although the radiation is starting to bother his hip.  (nerves have become effected from the radiation)

Thank you for your continued prayers!
Posted by Dom and Nan at 12:56 PM No comments:

This was taken on Wednesday.  The image is flipped.  The area circled on the right is actually his LEFT hip.  This is where they suspect a Plasmacytoma....and where he is getting radiation.  Notice the difference between his "good" hip and the affected hip.

We finished up "day 2 of radiation" yesterday.  8 more to go. The radiologist warned him that although he feels nothing now, the pain will be coming from surrounding nerves around the hip that will be affected by this radiation.

We have the weekend off, and then back at it Monday morning. 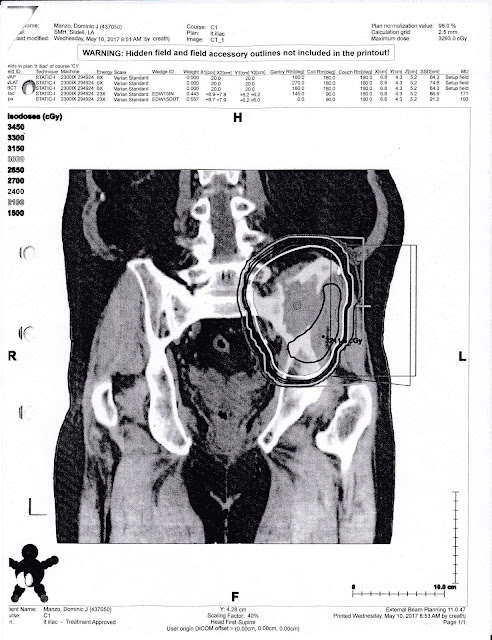 Solitary plasmacytoma is a rare disorder that is similar to multiple myeloma, although patients do not have myeloma cells in the bone marrow or throughout the body. Instead, patients have a tumor composed of plasma cells that are restricted to a single area of the body — usually the bone, but sometimes an organ.

At Memorial Sloan Kettering, our experts diagnose solitary plasmacytoma when a biopsy of the tumor detects the presence of plasma cells, but additional tests do not reveal signs of multiple myeloma — such as amyloid protein in the blood and urine, or the presence of myeloma cells in the bone marrow.
*THIS IS DOM....  bone marrow and blood work have been fine*
Our doctors can sometimes cure solitary plasmacytoma of the bone with radiation therapy or surgery to destroy or remove the tumor. However, 70 percent of patients with solitary plasmacytoma eventually develop multiple myeloma and need additional treatment such as chemotherapy, possibly combined with stem cell transplantation.
*This is DOM also*

Sunset Looking EAST on May 5th

This reflected our "dark but hopeful" mood after hearing about Dom's cancer returning. 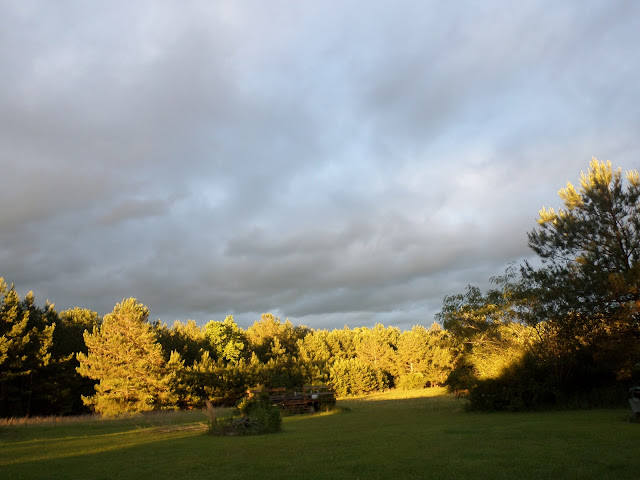 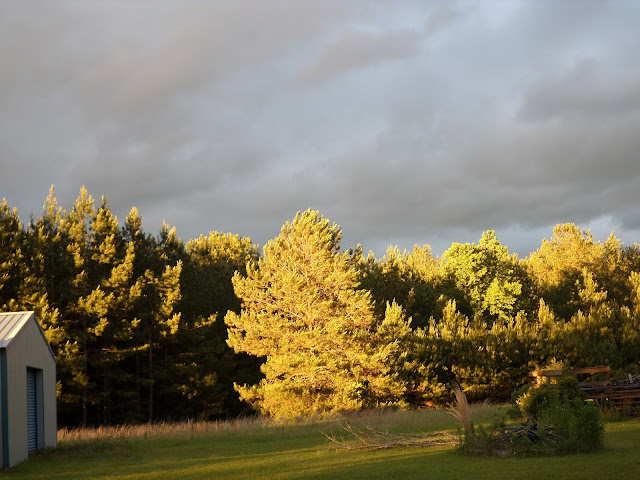 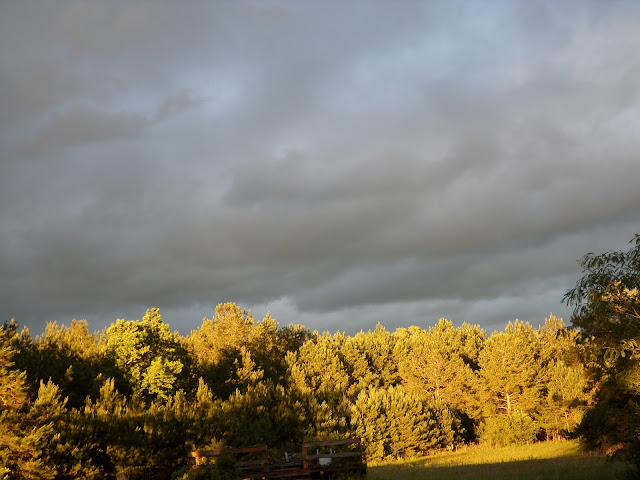 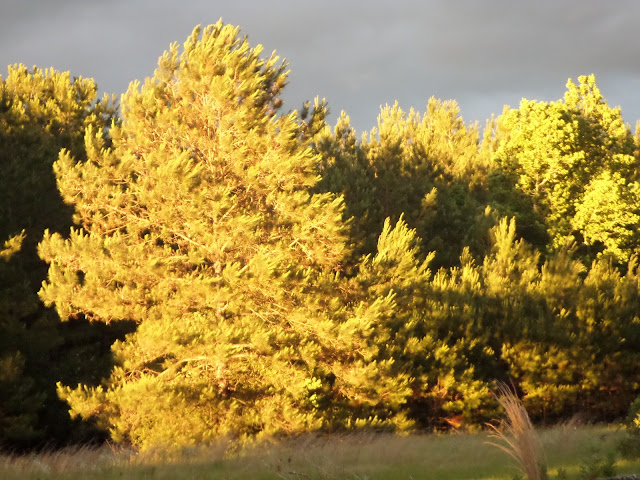 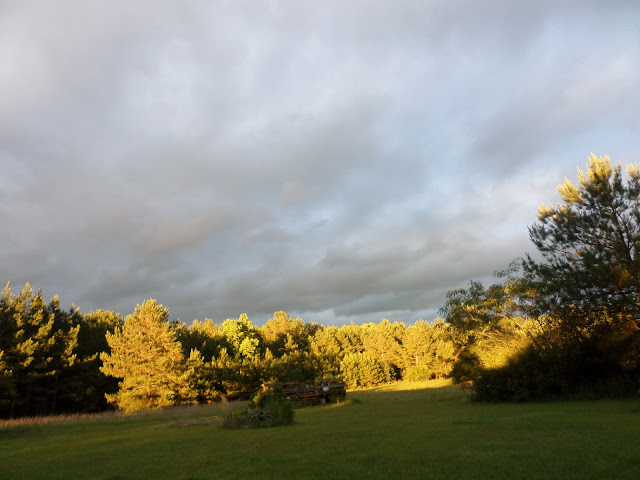 Dom's Cancer is Back

Well, gang-  after complete remission for over 7 years, his MM has returned.

His blood work and bone marrow biopsy showed absolutely nothing alarming.  His hip had really been bothering him, so Dr. Safah ordered an MRI.

We went to see her on Thursday, fully expecting yet another clean bill of health.

The MRI showed a 9.3-centimeter lesion on his left hip.  (Measures 3.66 inches in diameter).

So, she calmly announced that he was to stay off of his tractor, watch how he sits down, etc.  She's afraid that he would suffer a broken hip.

Then went on to say that she was ordering 10 radiation treatments, 2 months of Chemo and ANOTHER Stem Cell Transplant.

Needless to say, my eyes filled with tears.  She smiled and sweetly said that she wasn't the least bit concerned.  He did so well last time and remained clean for so many years..... that he would breeze right through this.  She said that this time it would be much easier on his body.

We met with a Slidell Radiologist doctor and our Slidell Oncologist on Monday and Tuesday.  The Radiology department did a CT Scan and tattooed his hip.

Our Slidell Oncologist said that he suspects that this is a Plasmacytoma, as his bone marrow and blood wasn't the least bit alarming to them.

This time around his Chemo will consist of Revlimid, Velcade, and Dexamethasone.

My tears have ceased and we're both very confident with our new team.  Dr. S. from Tulane told both of these Slidell doctors that he would zip right through this process.

After Radiation and Chemo, they'll gather his Stem Cells and the transplant will be done in New Orleans at Tulane.

This is all happening very quickly.  We walked around in a daze all weekend but hit the ground running on Monday.
Posted by Dom and Nan at 12:14 PM No comments: 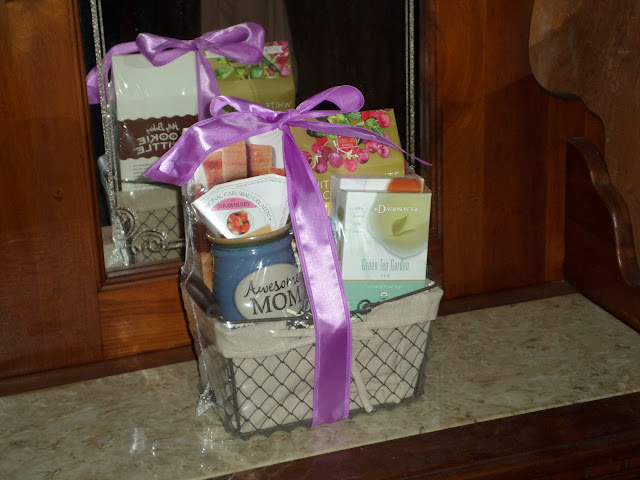 It contains these goodies:

Awesome Mom Mug by Burton & Burton - Your mom is pretty awesome and this mug will remind her of just how amazing you think she is each time she enjoys a cup of tea.

Green Tea Garden by Davidson's - 8 sachets - Delicious and soothing whether hot or iced, this light and flavorful organic green tea has just the right amount of sweetness from cinnamon and exotic berries.

Earl Grey Tea by Davidson's - 8 sachets - Earl Grey combines organic black tea from India with the all natural oil of bergamot for a delightful tea Mom will love.

White Chocolate Cranberry Cookies by Kimball Lake Bakery - 4 oz. - Mouth-watering crispy cookies with a delicate hint of sweetness from the white chocolate and the luscious tang of dried cranberries.

Strawberry Tea Wafer by The Original Carlsbad Oblaten - 1 oz. - Add this to any cup of tea to give it the perfect hint of strawberry. 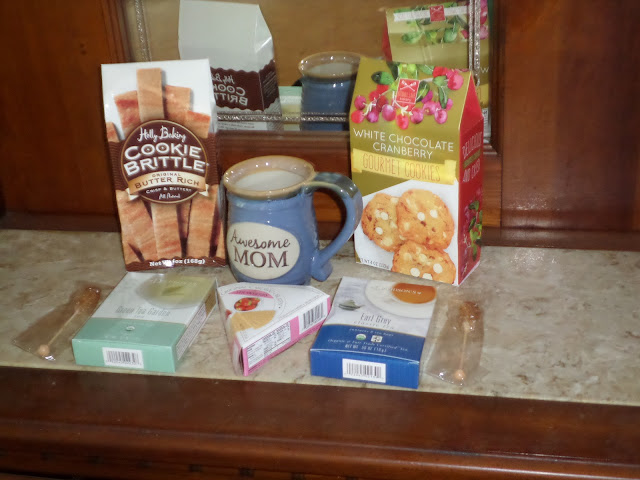 It really was quite lovely and TASTY.  2 little mice opened up the basket and proceeded to sip and nibble last night.  *grinning*

This company offers many different gift baskets with free shipping.  I definitely give my basket a THUMBS-UP!

https://www.gourmetgiftbaskets.com/
Posted by Dom and Nan at 10:22 AM No comments: 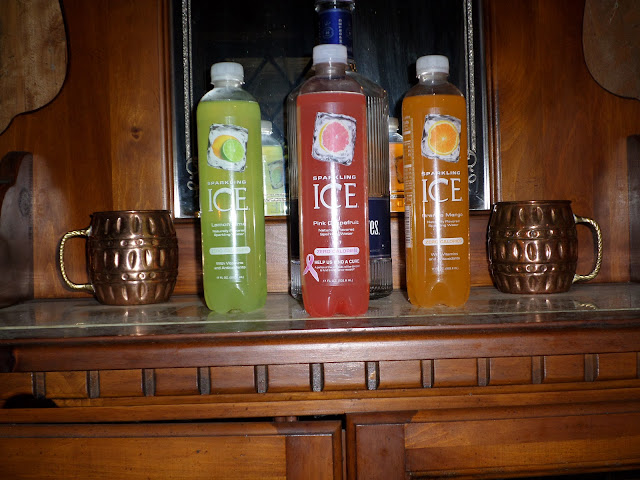 Hi gang.  The folks at "Sparkling Ice" sent me 3 bottles of their product.  It's great.  I didn't manage to put any aside for Cinco de Mayo, and will have to buy some tomorrow!  http://www.sparklingice.com/locate/

It's bathing suit weather, so I was tickled to try this low/no calorie mixer.  You'd never know that you were saving calories.  GREAT STUFF!

We had fun with these recipes: 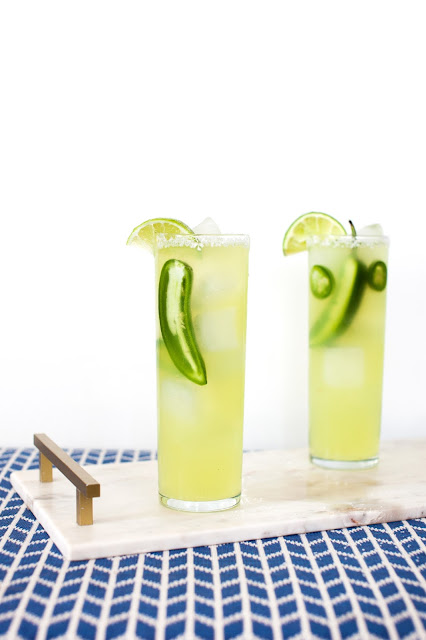 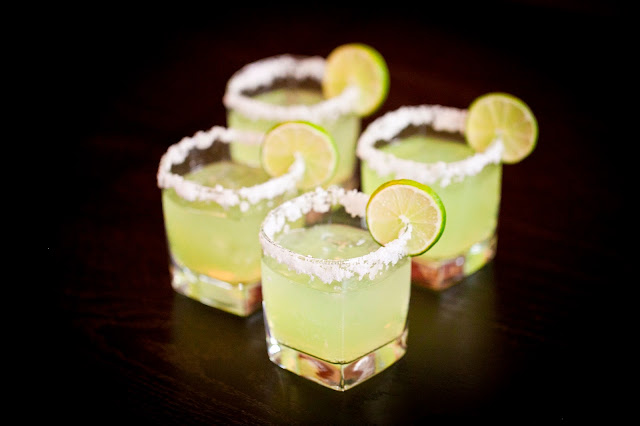 Directions: Shake and pour into a chilled rocks glass rimmed in salt. Garnish with a lime slice. 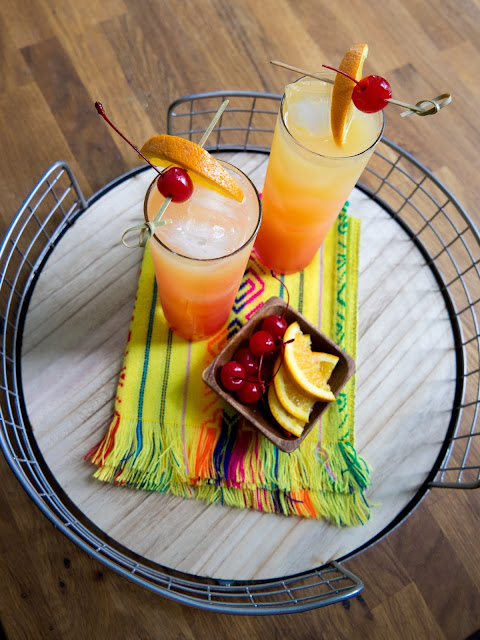 Directions: Mix all ingredients and serve in a tall glass with ice. 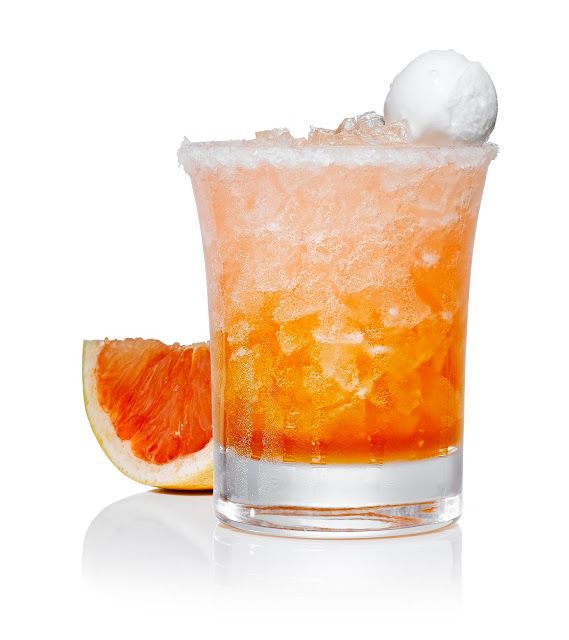