He's doing quite well. Laying in bed this morning, we talked about the fact that he hasn't had a weak moment or dizzy spell for quite some time. Weeks (??). His stomach is great.... he can tell that it's healing. Taste buds are back in full swing. Not only is he enjoying the occasional beer, but drinking 7-Up and loving it. (After the Stem Cell Transplant, carbonated beverages tasted like hell to him. It wasn't a matter of stomach discomfort as it was a matter of a funny taste with anything carbonated). Our neighbor came back on Sunday and commented that Dom had "gotten his color back". We knew that, but it's so nice to hear positive observations.

Our delight in taking a week off of blood work recently ended with disappointment. Tulane was surprised to see his blood TOO THIN after weeks of consistency. Dom's been a steady 1.5 for a couple of months...just where Dr. Safah wants him to be. We skipped a week, went in last Thursday, and he was a 3.4. It took his blood over 30 minutes to coagulate. They cut him way back on his Coumadin.

Dom decided not to bust open the brand new chainsaw that he bought earlier in the week. LOL.... true story. Could have been disastrous. *sighing*

Dr. Safah and her assistant, Tori (who has pretty much taken over for my "boyfriend" John Rink who moved to the Prostate Cancer group) took a quick look at Dom's rash. No big deal. Just some kind of funky "fungal" thing. Origin unknown. Over the counter wash and ointment. It's healing nicely.

Honestly.... ANYTHING that happens, both of us blame the Multiple Myeloma. It's something that we should be getting used to by now. Anyway, no big deal.

Heading back into town for just bloodwork tomorrow..... they can just take it and call us back to advise coumadin dosage after they get the results. It's still a long day, though... probably about 150 miles roundtrip. Makes me miss living in Metairie only 7 or 8 miles away!
Posted by Dom and Nan at 3:55 PM No comments: 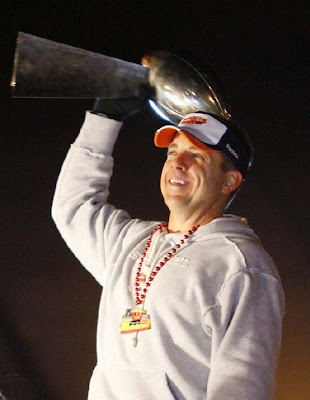 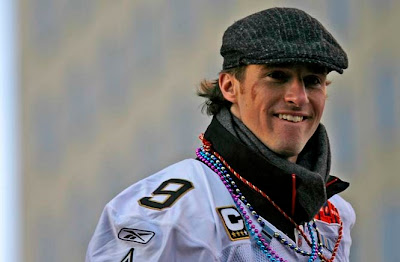 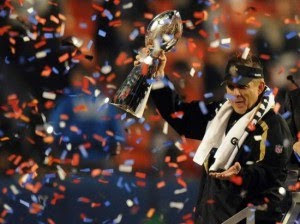 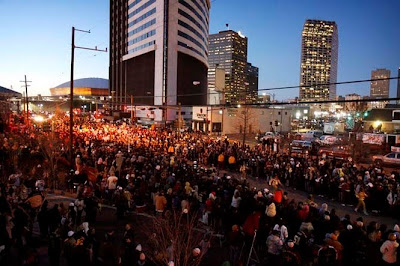 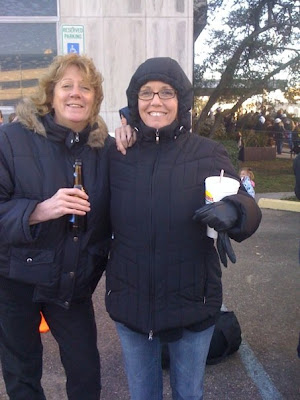 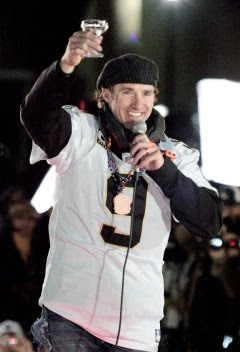 In the 27 years that I've lived here, I've NEVER seen New Orleans so happy. Our Saints have really turned this city around. Nothing but smiles, laughs and "Who Dats".... even at the Tulane Cancer Center, which can be rather depressing at times.

On the Tuesday after Super Bowl, the major Carnival krewes loaned the Saints their floats for a victory parade. Much to my delight, Lovely Linda was in town. She called and suggested that the 2 of us attend and I spend the night with her in Metairie.

Drove in on Tuesday morning. We stopped at Oscars for a drink and Oscarletta. (Muffaletta on French). Then, made our way into the city shortly before 3pm.

Just as we were looking for a place to park, the New Orleans Mission opened up their lot- $20 per car....proceeds going to the Mission. Great cause and only 2 blocks from where we were headed. The first of MANY "feel good" moments that day.

A Private Investigation firm that Linda worked closely with had set up a party on Howard Ave at the Catholic Charities building. Access to bathrooms, beer, booze, wine, Cane's chicken tenders.... outstanding! Great location. In between the Superdome and Lee Circle.

The parade was magnificent. We were only 3 people back from the barricades. Our area was only about 10-deep. Other areas downtown were actually 50 people deep! The highlight of the evening for me is when Sean Payton's float stopped directly in front of our area for almost 20 minutes. I actually made eye contact with the man.... got some beads, too! He was kissing the Lombardi Trophy and blowing kisses to the crowd. (Caught one of those, too!!!! What a cutie!).

It was truly a magical night. Estimates have the crowd at 800,000+ people. The biggest crowd EVER in NOLA... for ANY event, Mardi Gras included. I'm so happy that I was part of this!

On the way home (Thanks for your hospitality, Renee and Jeff!) we stopped for drinks and munchies at the Chateau Bar. They were replaying the Super Bowl. Christ.... you'd have though it was live with all of the cheering going on. Too much fun!

As I type this on Feb 19th, the city is still in a state of elation. I'm loving every moment of it. The Who Dat Nation is loud and proud!
Posted by Dom and Nan at 1:04 PM No comments:

Not too much to report on the health-front. Basically just good stuff.

Had an appointment with Dr. Safah last Thursday. She looked at his recent CBC numbers and swept into our examining room with a big smile and said, "You're doing great!". (What a nice thing to hear from your cancer doctor!)

He's gained 4 pounds. She was happy about that.

His stomach is SLOWLY getting better..... on Superbowl Sunday, he decided that he was going to "drink beer" for the first time in over 6 months. He ended up sipping on 5 of them throughout the day/evening. Sunday was the first time that they actually TASTED GOOD! By the time he went to bed, his stomach felt like hell. Wasn't certain if it was the beer or all of the spicy Mexican appetizers that I served all day. We're guessing it's a combination of the two.

So, he's cooling it. We're staying home on Tuesday, Mardi Gras day. I'm guessing that he'll try a couple of beers then.

We've enjoyed this week. First time in months (???) that we didn't have to take a trip into New Orleans. He developed some type of rash on Monday, but decided against calling Tulane.... it seems to be clearing up with his leftover Shingles ointment. Looks a little like shingles, but not terribly painful.... upper inner area of all four limbs. Guess we'll find out NEXT Thursday when we venture back in for his infusion.

Going to venture out on Saturday for a couple of good steaks for Valentine's Day. We've got a great little meat market about 20 miles from here.

It's been sleeting all day here. Temps are dropping, and we're expecting to wake up to maybe 4 inches of snow. Glad we don't have to go anywhere..... these people can NOT drive on snow or ice..... A dusting of snow turns into a freak-out resembling "bumper cars" on the I-10. Been there, done that... NO MO!

Nan and Dom
Posted by Dom and Nan at 6:13 PM No comments: 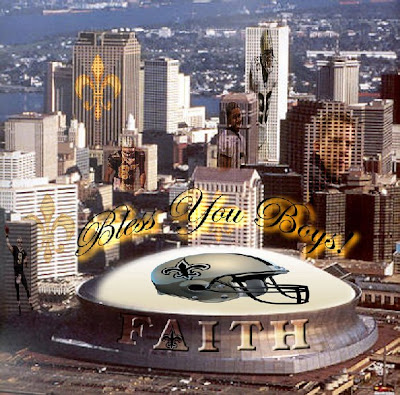 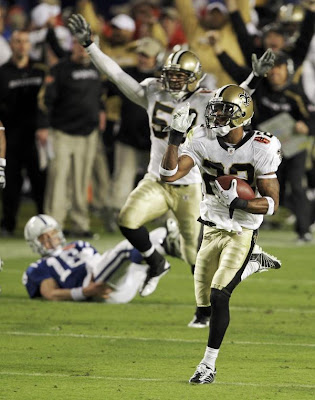 Wow. What a Superbowl!!! We had a great day.

You know when Peyton Manning was a kid he probably used to go to bed at night and dream about throwing the winning touchdown for the Saints in the Superbowl. And now he has.

Dom's cousin, Joe, drove in from Pensacola for the night....bearing gifts.

I had a nice spread of food- we nibbled and sipped all day/evening. How 'bout dem Saints???? (I love the photo of Manning on the ground!!!)
Posted by Dom and Nan at 5:03 PM No comments: