Well, I can't seem to slow this guy down.  (And couldn't be any happier that he's feeling so well!)

Dom has a '72 Corvette that he loved.  About 6 years ago, a lightning strike caused a fire in his barn.  (shown in the distance of one of these pictures).  The insurance company declared this car a "Total Loss", and allowed Dom to buy it back from them.

He rubbed out most of the smoke damage himself.  The rag-top wasn't damaged, thankfully. He tried working on his brakes numerous times.  Even trailered it to a local mechanic.  He couldn't do anything, either.

Now that he's got his new garage, he moved it up here.  Presently talking to a guy who's showing interest in coming over on weekends to work on it.  (brakes, headlights, etc.) 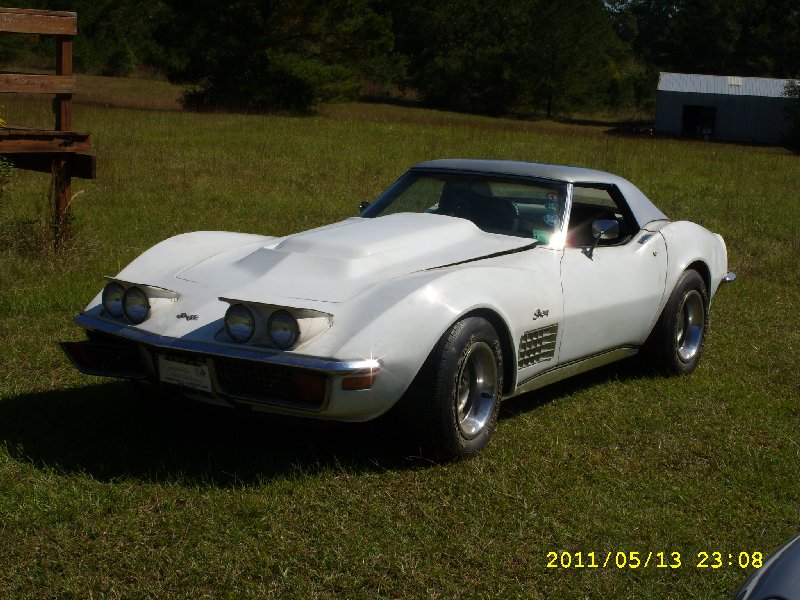 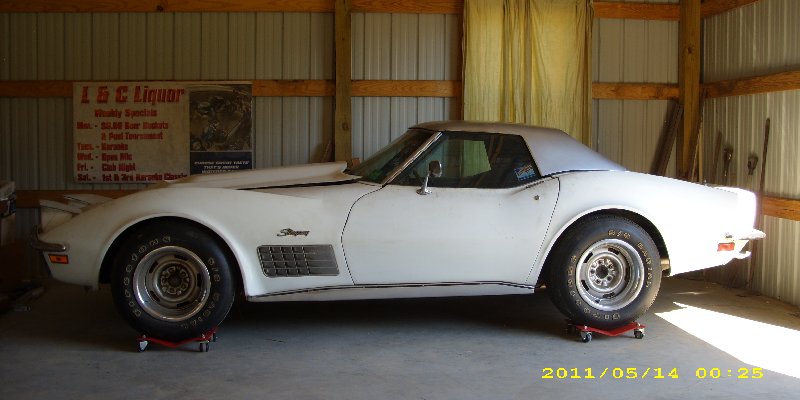 Was hoping this would be my car, but nope.  Once it's fixed, getting that car will be MY NEW PROJECT!

(Looks like I need to fix the date on his camera!)
Posted by Dom and Nan at 1:03 PM No comments: 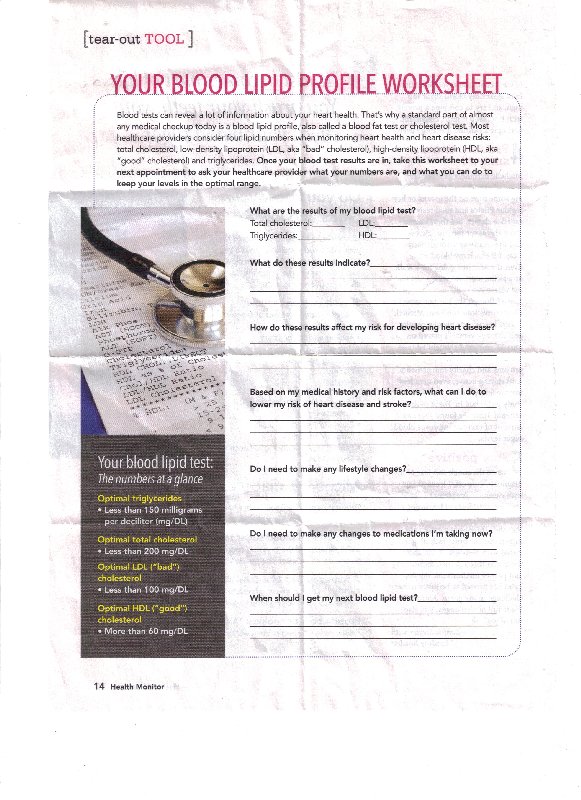 October on the Beach with Joe and Ping

Hope this post finds everyone healthy and happy.  We've been home for 1 day, and Dom's sinuses are acting up again.  He felt great in Florida.  *sighing*

We headed to PCB on Wednesday morning.  Our first stop was Smokin' Vapor for my liquid nicotine, then on to Pier Park and a Cowboy Burger at Tootsie's .  Great stuff!

Spent some time across the street with Travis, who is now managing the joint.  (Donn has moved on to bigger and better things.)

We hit our fitness room every morning.  Much to my delight, Dom is enjoying it.  I'm becoming quite fond of the steam room after working out.

On Thursday, Happy hour at Coytoe Ugly was fun, but the bartenders weren't very pleasant.  I miss the summer crew.

Ate at Dee's Hangout afterwards  His food is absolutely incredible.  Dom had his usual.... an over-loaded shrimp po-boy.  I had a dozen jalapeno/cheese baked oysters.  Hit the spot with their dollar pint draft beers!

Spent alot of time on the beach.  The water was gorgeous, but a little chilly.

Dom's cousin Joe and his wife joined us on Saturday.  Ping cooked us her signature noodle dish with chicken and soy "Italian Sausage".  Great stuff.  Hung out playing on the beach all day with them, then ventured across the street where Tina was working...  had big fun.

They left on Sunday morning after our work-out.  I spent a little time at the beach, then we settled in for a DISMAL Saints game.  Horrid.  Absolutely horrid. 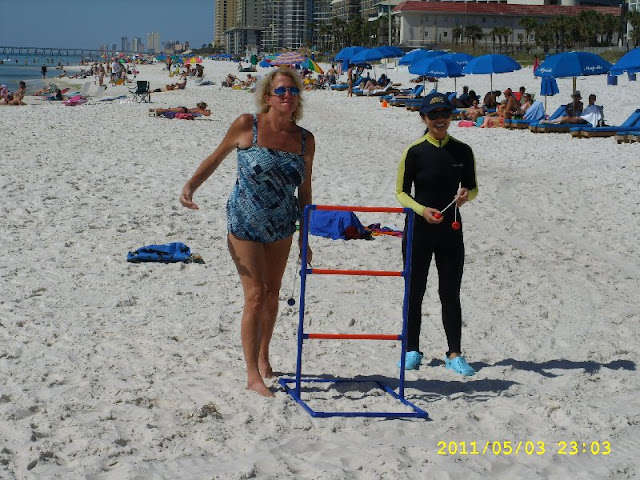 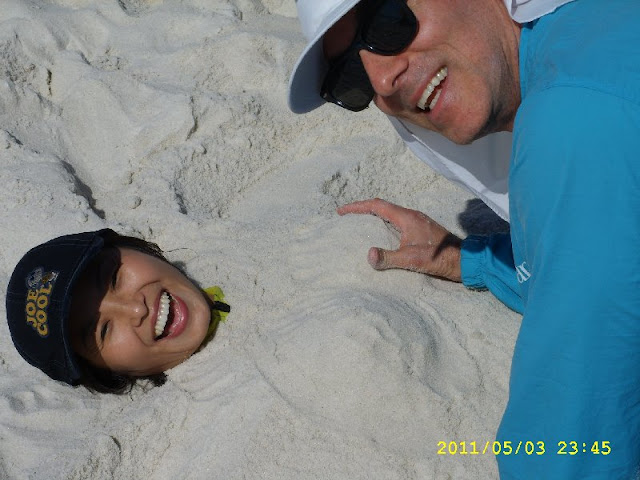 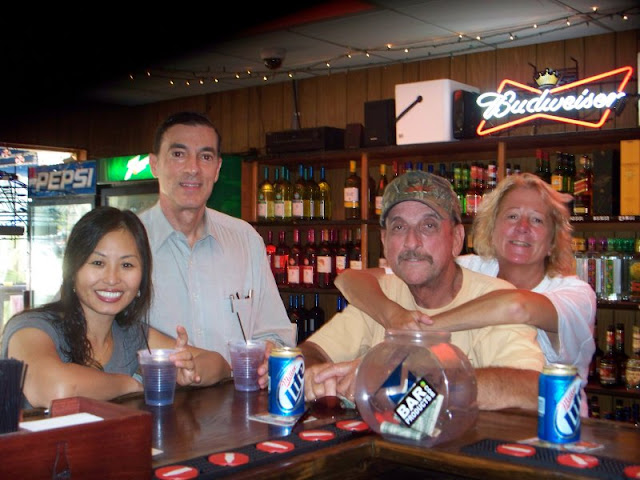 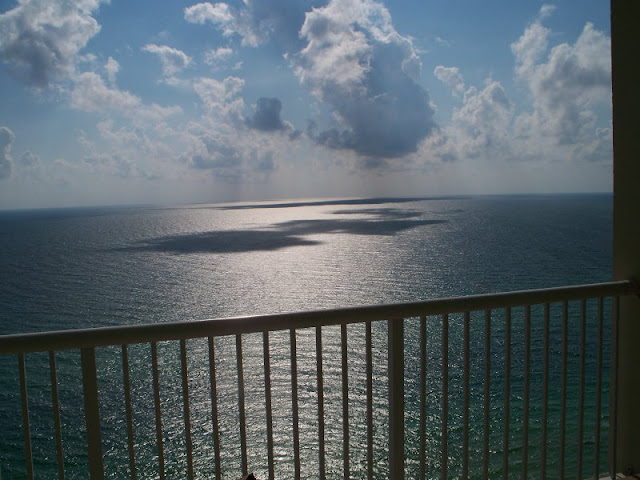 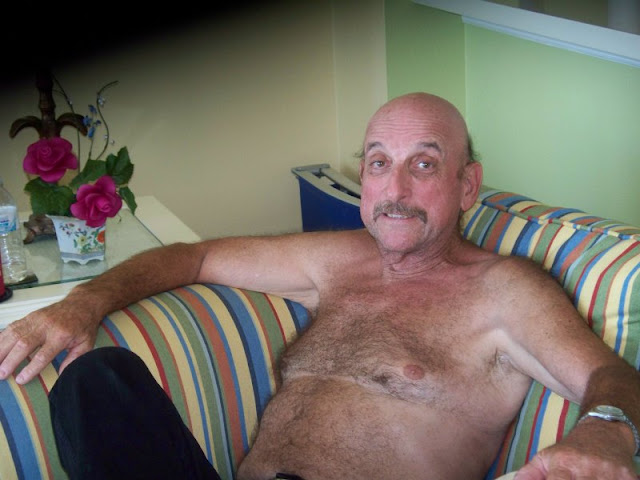 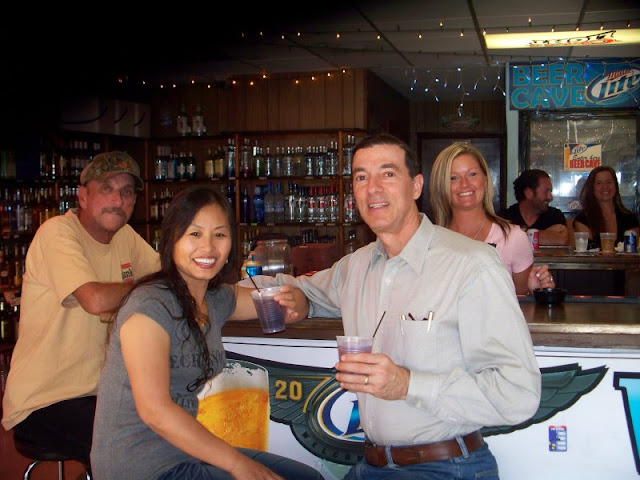 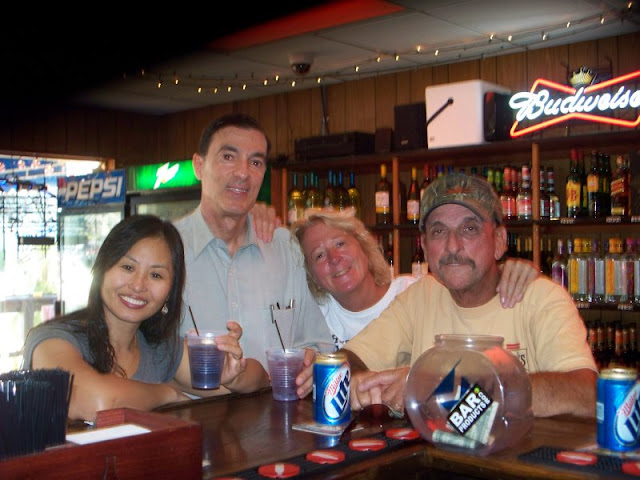 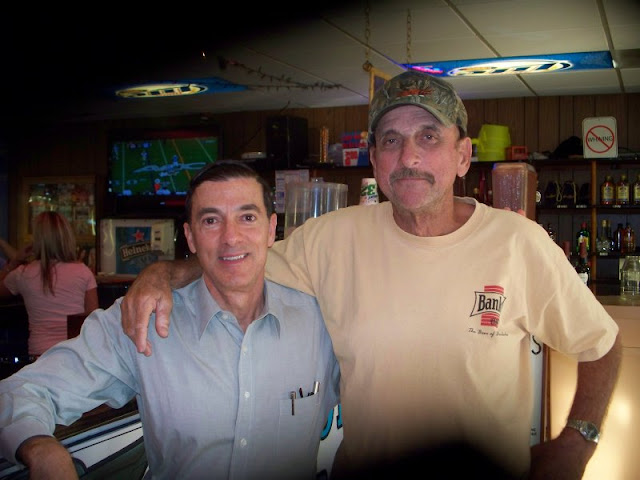 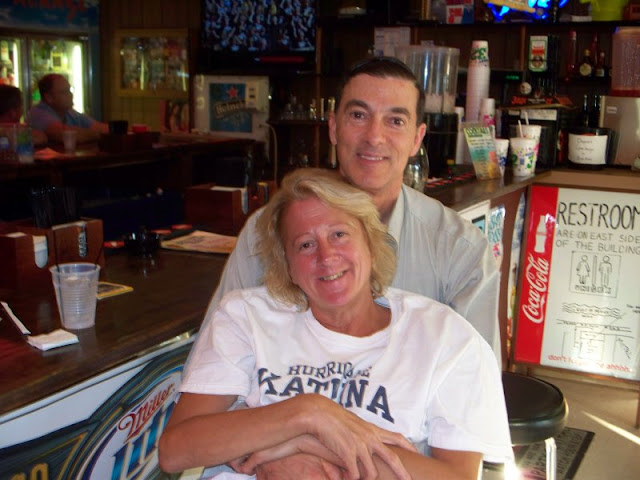 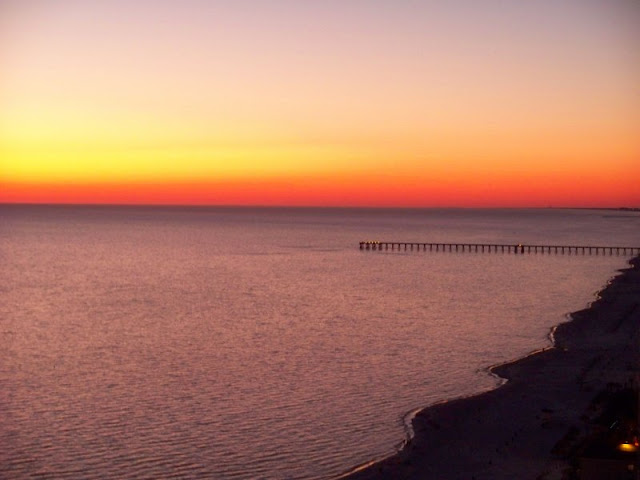 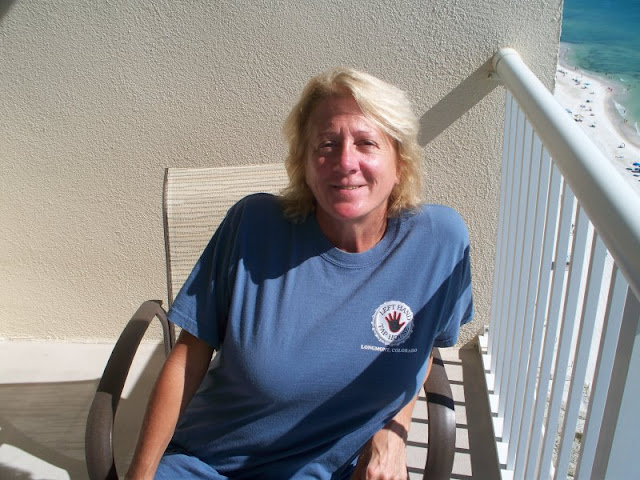 Hit the road at 9am yesterday, and arrived home 5 hours later.
Posted by Dom and Nan at 1:17 PM No comments:

Fall is Upon us.... FINALLY 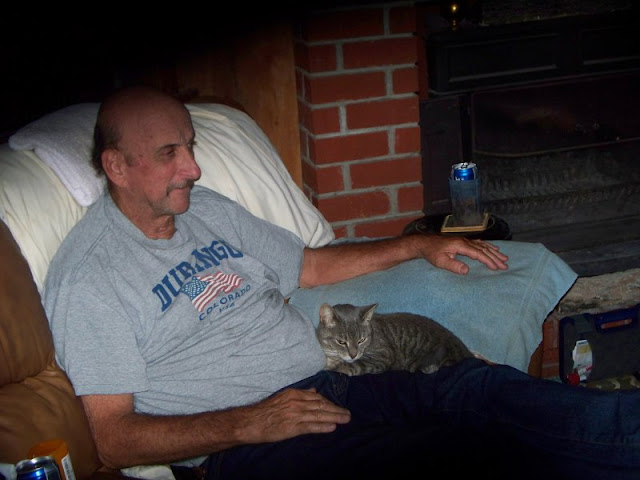 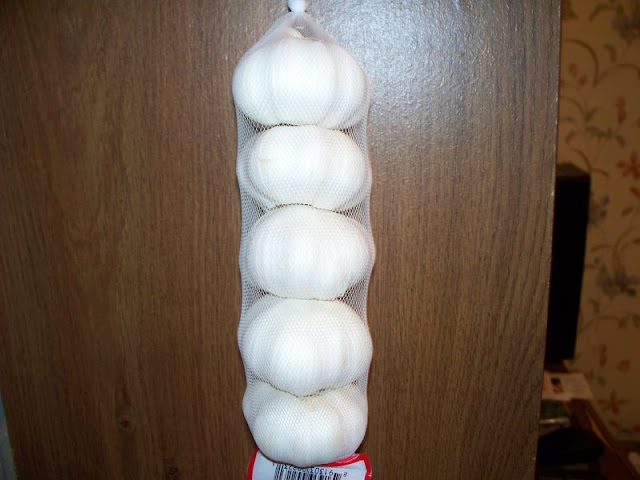 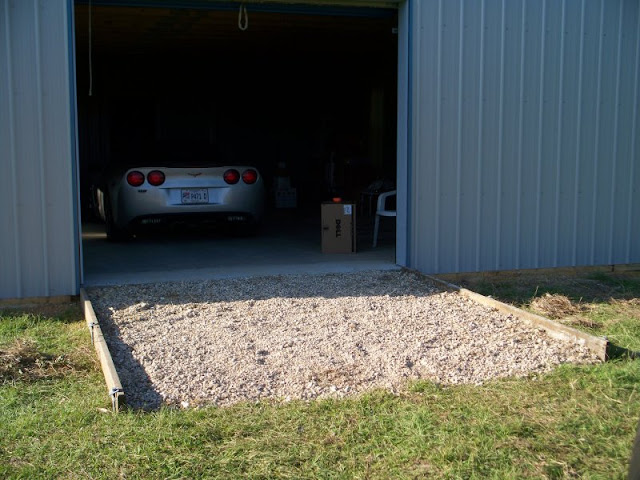 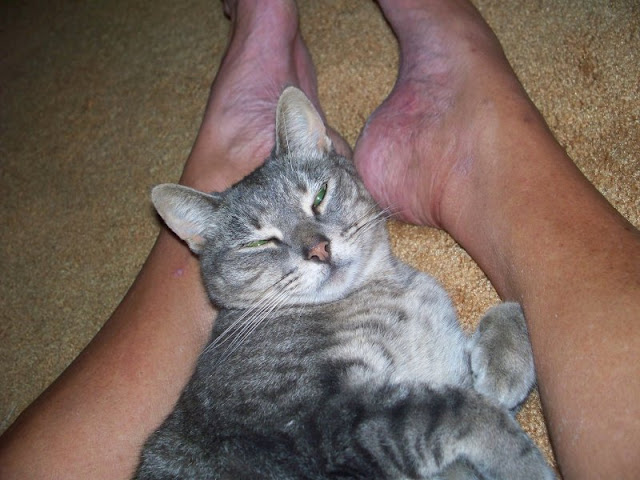 Hello gang.  Hope this note finds everyone well.
Things have been busy, busy around here.  Now that the temps have dropped into the mid eighties, we've been spending alot of time outside.
Cut the grass for what will hopefully be the last time until Spring.  Dom poured gravel at the entrance of his new garage, so as not to bottom-out his car.
He's been fighting some kind of upper respiratory thing for weeks.  Finally got him to the doctor on Thursday.  He dropped me off to get my hair cut and colored, and saw our Nurse Practitioner in Slidell.  It turns out it's a bad sinus infection.  (he's allergic to Bahia (??) Grass.... unfortunately, we've got acres and acres of it).  Gave him a shot in the fanny and sent him on his way.  Over 70 bucks of meds later, he's still spitting crud up.  He's promised to start wearing a mask while bush-hogging the property.
While waiting for him to pick me up, I stopped in an upholstery shop.  I've got my maw's Queen Anne Chairs which are beginning to look a little rough.  Met the owner and liked him.  LOVED his many fabrics.  Going to drop the chairs off to him soon.  I'm going to have a helluva time trying to pick out the fabric.
Dom picked me up and we put the top down a drove back roads.... put a couple hundred miles on his little beauty.
Had a late lunch at Yo Yo's Mexican Restaurant, did a little grocery shopping and came home.
Speaking of grocery shopping....  Because I've been watching my triglycerides for the past few months, I haven't had any bread, pasta or potatoes.  Bought some whole grain white bread, which I enjoy.  I've always had an aversion to "whole wheat" ANYTHING.  But, my little spaghetti-face (as I affectionately refer to him) has been feeling deprived.  So, I went ahead and bought a pound of Barilla Plus.... Angel Hair pasta.  Super high in Omega 3.  Contains flax seed, which I like.
He wanted some clam pasta.  So, when buying the garlic, I saw this gorgeous product.  Much to my dismay, it was from China.  Bought it anyway.  DELICIOUS.  Uniform cloves, tasty, easy to peel.  Probably chemically altered or something sickening.
Made Dom his pasta using the whole grain Angel Hair.   DELICIOUS!  I fully expected to dislike it, but was presently surprised.  I'll have no problem switching to this stuff.
I've been walking to the mailbox 5 days a week (1.5 miles round-trip).  Heading into see Dr. Culasso around the 19th for bloodwork.  If I haven't lowered them after all of this, I'll have to resign myself to meds.  Yuck!
Oh yeah.... our Saints are 4-1!!!!!!  WHO DAT!!!!!
Posted by Dom and Nan at 2:16 PM 1 comment: