POW / MIA - And a Fitting Reflection 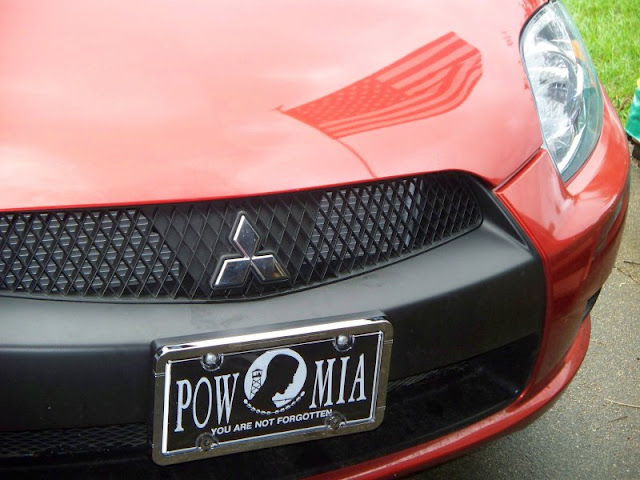 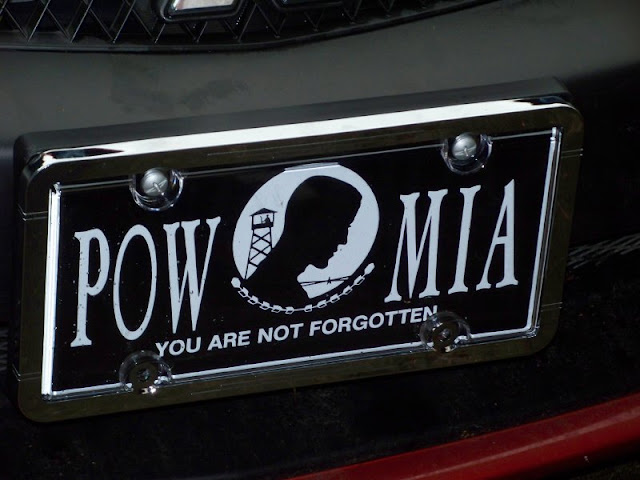 Dominic picked me up a POW/MIA license plate a couple of weeks ago.  He put it on the front end of my car.  Of course, I HAD to take a picture....  check out the reflection on my hood!  Pretty kewl, huh?
Posted by Dom and Nan at 12:55 PM No comments: 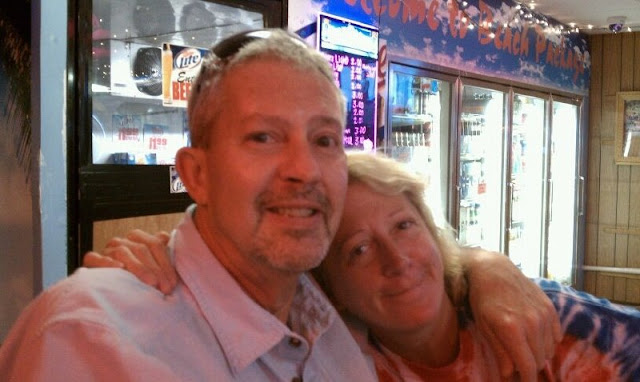 This is probably the nicest picture that Ricky and I have ever taken together.  Bro....it was AB-FAB!
Posted by Dom and Nan at 10:32 PM 1 comment:

Wonderful News.... No Signs of Myeloma.... Nothing!

Hi gang.... I've got some wonderful news.  Our patient is still in Complete Remission/Response!
His M Spike showed ZERO
His 24 Hour Urine showed ZERO
His Body Scan showed NO LESIONS
There is finally light at the end of this 3 year long tunnel!  We go in tomorrow morning for a Bone Marrow Biopsy, and then will get the results next week.
We fully expect them to cut Dom loose.  No more treatments.  Just check ups every 3 months. Thank you all for your prayers and warm wishes!
Posted by Dom and Nan at 1:34 PM 1 comment:

Dom's VA Visit and My Bloodwork 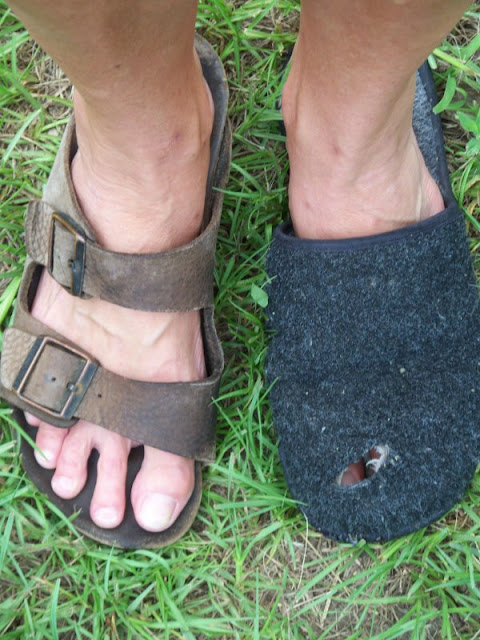 Happy Friday, Gang!
Wanted to check in again..... Yesterday morning we left our house for a trip to the VA Hospital in Biloxi.  (Obligatory check up with his VA Oncologist).  Our driveway is 3/4 of a mile.  When I got out of the car to unlock our gate, Dom started laughing at me.... I left the house with 1 Birkenstock and 1 Slipper.  Whoops!
Drove back to the house, got rid of the ratty slipper and hit the road.
The Biloxi VA is always a very pleasant visit.  GREAT people.  We did more chit-chat than anything else.  Have to go back in four months.
Took the scenic route on the beach through Gulfport, Long Beach, Bay St. Louis and Waveland.  Hadn't been West of Gulfport since shortly after Katrina.  Wow.  It was unrecognizable.  We felt lost in our old stomping grounds.
Headed North through The Kiln (childhood home of Brett Favre), shot across to Picayune, then up to Bogalusa for lunch at Yoyo's Mexican Restaurant.  Put a couple of hundred miles on the corvette.  Very pleasant 2-lane roads all of the way there and back.
I got a rather disturbing call about my bloodwork.  Doc's nurse practioner wants me to start taking Tricor.

Bloodwork showed my Cholesterol at 259.  Doc likes his patients well under 200.  My Triglycerides were a whopping 331.  Normal is under 150.
So, did a little research and decided that I wasn't crazy about this drug.  Called Doc's nurse to confirm that HE was OK with this.  Nope.  Glad I called!  Stop drinking, stop smoking, blah, blah, blah, while on Tricor or just try to bring it down naturally.  That's precisely the way I'm going.  Going to try to tweek my diet and go in for more bloodwork in 3 months.
Also need an appointment for a colonoscopy (it's been well over 5 years) and a Bone Density Scan now that I'm menopausal.
Wednesday we'll head back to Tulane for Dom's BONE MARROW BIOPSY and the remainder of his childhood immunizations.
I'm glad that we love all of our doctors.... we sure spend enough time with 'em!  Have a great weekend, gang!
Posted by Dom and Nan at 1:50 PM 2 comments:

I'm embarrassed to say that I have no other pics of Ric other than the one in the previous post.  We were too busy beaching, drinking and eating to take pictures!
I drove in on Wed. June 29th.  Dom drove in on Friday July 1st.  We picked Ric up at our beautiful new airport, less than 20 miles from the condo.  (From our home to the NOLA airport is a good 2 hour drive....so 20 miles is like a hop, skip and jump for us)
The 3 of us had a couple of beers with Donn and Tina, then ventured for a sandwich poolside at our place.  For the next week, we were hanging out at the beach.  The water was brilliant while Ric was here.  I was so happy about that.  It's really hit/miss every visit.
We ate out all over.... Dee's Hangout, Montego Bay, Los Rancheros, The Firefly, The Front Porch.... surprisingly, I only gained 2 pounds and have knocked that off already.
Dom left on Wed...Five nights is plenty for him.  Ric flew home on Saturday.... the water was horrid.  Full of seaweed.
Saturday afternoon I had a couple of visitors.... Bonnie and Clyde.  Gorgeous orange eyes and seemingly friendly.  When I'd go out to the balcony, they'd "coo" at me....  They hung out until I left on the following Wednesday.  It wouldn't surprise me if they're setting up house as I type this.
I had my annual bloodwork done this morning and a request to make an appointment for a colonoscopy in the coming weeks.  Afterwards, Dom and I had lunch at Applebees.... did their $5.99 salad/soup deal... great spinach salad and French onion soup.  I had two of each.  Dom had soup and sandwich.  Very pleasant afternoon.
Have to go to Dom's VA oncologist later this week.  Then, off to Tulane next Wednesday for a bone marrow biopsy.  Then back a week later.  Yikes. 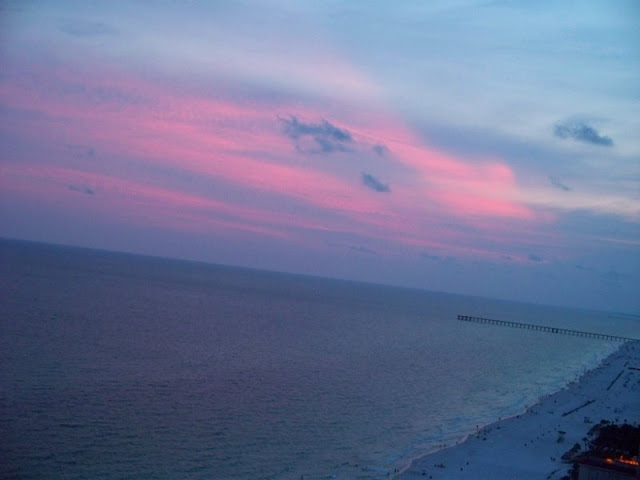 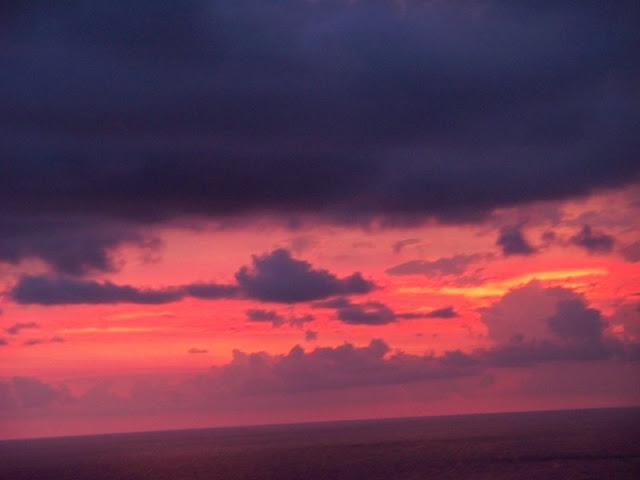 Hope this finds all of you feeling well.... we love you guys!
Posted by Dom and Nan at 3:18 PM No comments: 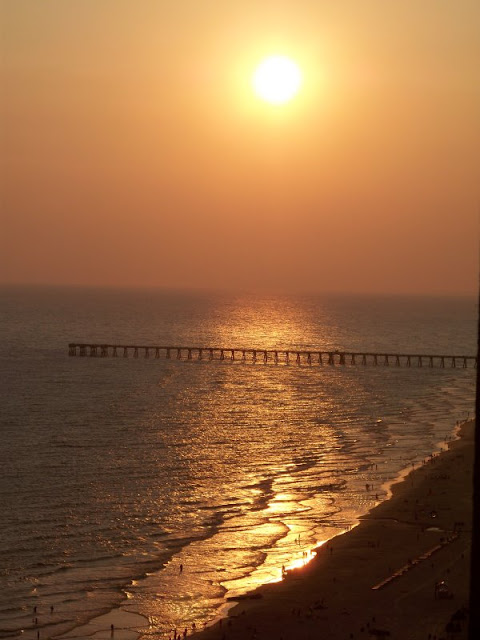 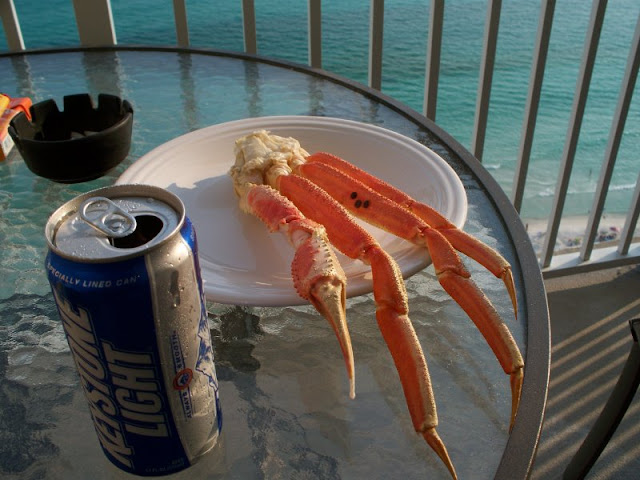 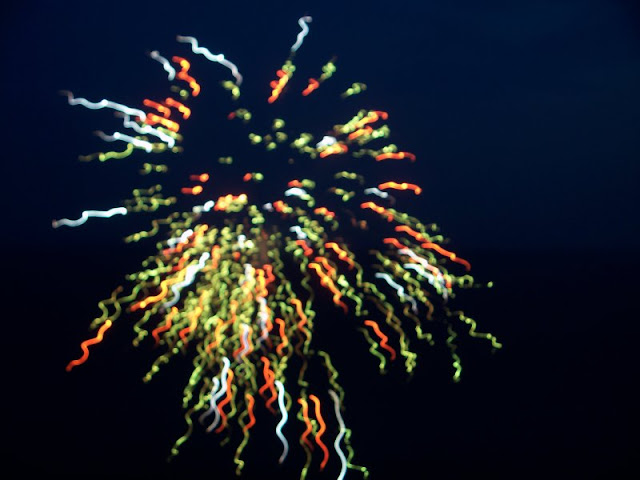 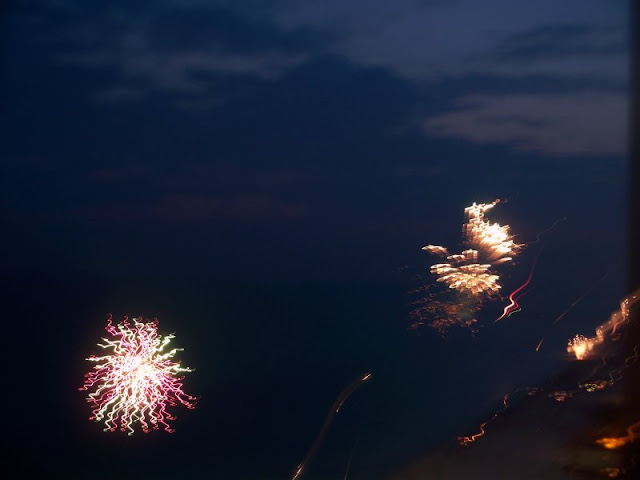 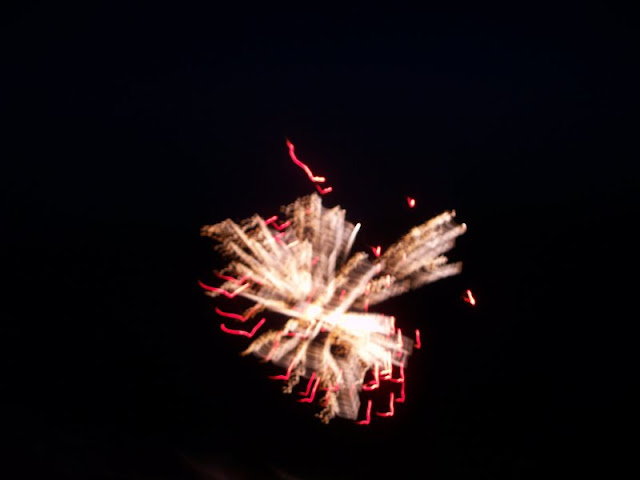 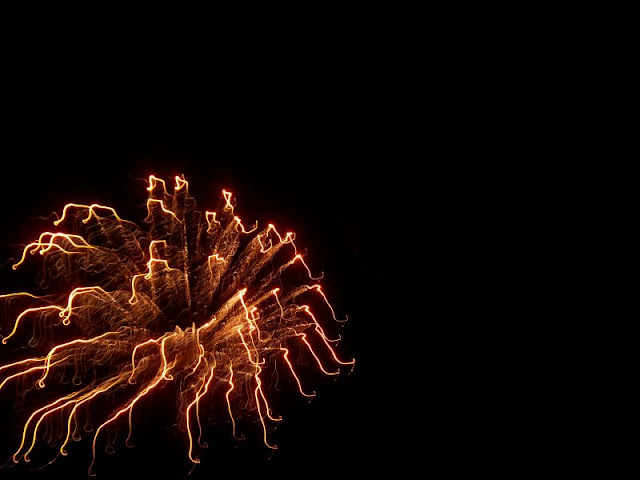 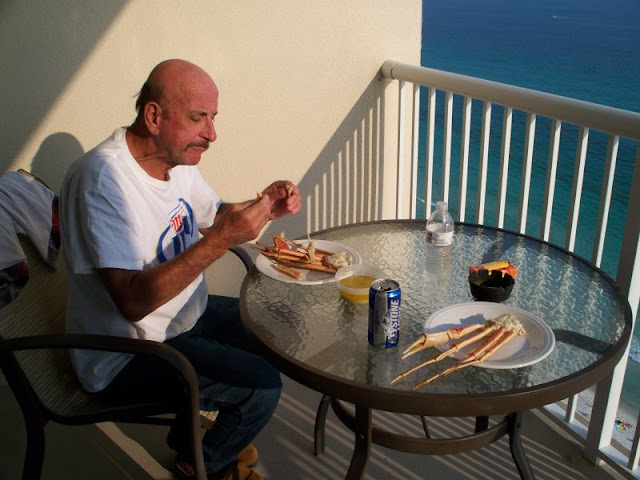 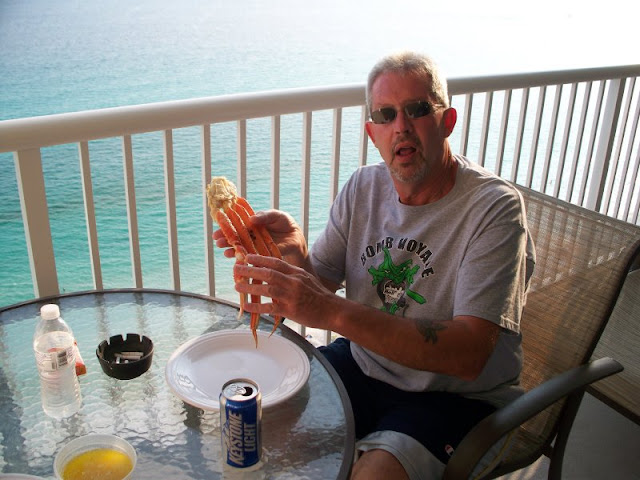 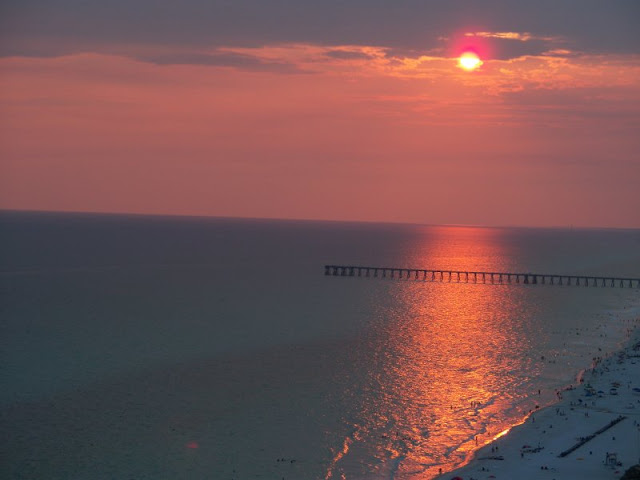 Hi gang.... Wanted to post a handful of pics from the Fourth of July.  Brother Ric flew in from Ohio for an 8 night visit.

The 3 of us feasted on the balcony with 3 pounds of steamed shrimp, 3 pounds of snow crab legs, 2 lobster tails, potatoes, corn, drawn butter and some kick-ass cocktail sauce.  What a delight!  Brian might just have me spoiled when it comes to his shrimp and cocktail sauce.  Thanks again, man!

After the sun went down, the fireworks started.... just as amazing as last year.  Many exploding right in front of our balcony.  These were all residents and condo renters.... I can't begin to guess the amount of money that private individuals spent on the beach with these gorgeous displays.  Unreal!
Posted by Dom and Nan at 4:51 PM 1 comment:

Dom and I were at the beach for a couple of weeks, thus no posts.  However, we're back, he's feeling great and it's full-speed ahead!

Hit the ground running this morning.  Drove to Tulane.  While Dom signed in for his monthly Zometa infusion and doctor's visit, I dropped off his 24 hour urine specimen. (more reliable at detecting Myeloma cells than blood tests).

Caught up with our patient to learn that they had cut him loose from his monthly infusion!  Yippee!

Next, had visit with Dr. Safah and a couple of her gals and had some bloodwork.  She ordered the normal CBC, as well as an M-Spike reading.  That we'll get back in maybe 10 LONG days.  Our Colleen gave him 3 more childhood vaccinations, then sent him across the street to the Medical Center for a Full Skeletal Survey.  (looking for any lesions).

We return in 2 weeks for a Bone Marrow Biopsy  (Done by John Rink, my hero over there) and 3 final vaccinations.

A couple weeks later, we'll have to go in to discuss the Biopsy  (making us come in to discuss it whether it's good or bad news.... this is putting a cramp in our beach time!)   *grinning)

Dr. S. is confident that all will be well, and doesn't expect to have to see him for a few months.


No more Zometa.  No more Thalidomide.  No more Coumadin.   We're in heaven, gang.
Dom's "2nd birthday" will be Sunday, July 17th.... please send prayers to my birthday boy!  Love to all of you-