Thought I'd give you a Dominic update. He's feeling "pretty good". Best he's felt since the Stem Cell Transplant. He's eating well and finally gaining some weight. (Dr. Safah gave him permission to load up on junk food.... he's become an ice-cream monster in recent weeks)

He hasn't had a dizzy spell or a weak-spell for a couple of weeks. This is a "first". Stomach is still not good, though.

We fried some chicken wings last night. No Buffalo sauce, just fried wings. He was up until after 3 am. His tummy can't handle grease..... YET.

Carbonated beverages taste horrible to him. No beer, but has been sipping and enjoying an occasional Bloody Mary made with ZING ZANG.

I flew back to NOLA on Monday afternoon. Returned back to MS after dark. We did nothing much but unpack apartment boxes on Tuesday and Wednesday. My house STILL looks like a shit magnet.... apartment stuff all over the place. Unreal. Might need a bigger home!

Woke up and hit the road yesterday before dawn. Got to Tulane for 7:30 am.

At 8:30, the Nuclear department gave Dom a pill that was encased in 2 locked tubes...needed a combination to open it for him. Turns out it was a "radiation" pill. Told him to come back for tests in 4 hours.

Meanwhile, we had an appointment with Dr. Safah. She's pleased with his numbers. Still tweaking his coumadin intake. Her only concern right now is his Thyroid. (Thyroid Specialist is the one who ordered this nuclear test).

I asked her when we could finally find out IF HE WAS IN REMISSION.... not for another 2 months. She wants 3 months of Thalidomide treatment before testing again. *sighing*

Then, we went to the Infusion center for a 15 minute drip of ZOMETA. (same drug classification as the 2 hour drip he used to take.... "Aredia"... these drugs are similar to women's Boniva, but about a zillion times stronger to fight off lesions/tumors in the bone).

Then back to Nuclear department for some type of scan. As I wasn't in the room drilling them, I'm not certain just what it was. Dom said that it was similar to an MRI, but they concentrated on his neck/thyroid.

Spent the night in Metairie at Chris' house. Got a couple of pizzas, had a few beers and watched my Tide Roll all over Texas!

Back to Tulane this morning for another visit to the Nuclear department. They did a quick reading and sent us home. We have to go to the Thyroid doctor on Tuesday. (Metairie). Looking forward to doing not much of anything else until then. We're tired. Doctors and Hospitals sure can get tiring!

Happy Friday gang... have a great weekend.
Posted by Dom and Nan at 2:12 PM No comments: 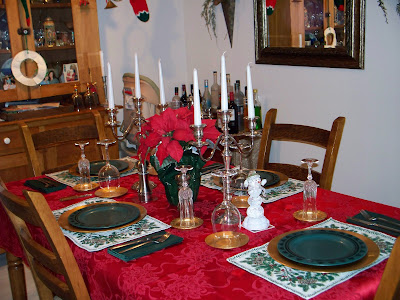 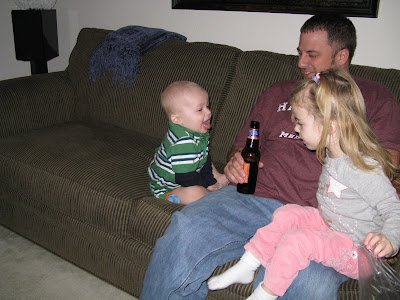 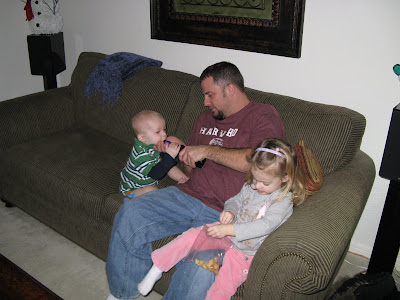 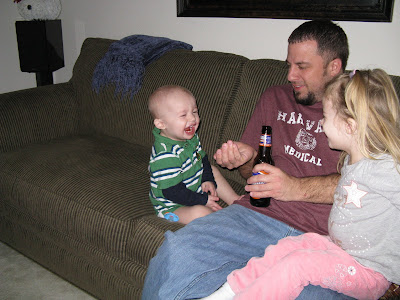 I am absolutely chilled to the bone. Have been for 2 1/2 weeks!

Flying home tomorrow, so this will be my last blog entry for awhile.

Had the whole gang over here. Sipped on a little wine, a little champagne, a little egg nog. Very pleasant day.

Ric put together a lovely dinner table. The highlight of the day was probably terribly polically incorrect..... watching little Blake drink beer.... and then watching his reaction. Too funny!
***************************
Yesterday, Saturday, Ric and I drove into "Old Loveland". Very quaint. Stopped in at a bar for a couple of drinks.... had just read that it was voted "The Eastside's Best Dive Bar"... CINDY's FRIENDLY TAVERN. Fun local joint. Cindy was friendly, indeed!
Posted by Dom and Nan at 10:01 AM No comments:

Amy and her girls left on Wednesday morning. Ric and I ventured over to Fiesta Brava for margaritas and some pretty decent food... http://www.fiestabravamexicanrestaurant.com/ Had an adorable little waiter.... hated to leave! "Uno Mas"..... "Uno Mas"..... *smiling*

Pretty good stuff. Sat in front of the TV watching the festivities in New York. Had some champagne at midnight... nothing exciting.

All is great with Dominic. He feels good. He's delighted to be back home. He's got 3 bitchy cats yelling at him.... ah, just like old times!