Newswise — ROCHESTER, Minn. – People diagnosed with multiple myeloma are more likely to live longer if they are treated at a medical center that sees many patients with this blood cancer. Mayo Clinic researchers published these findings today in the Journal of Clinical Oncology.

Multiple myeloma is a rare form of blood cancer that attacks plasma cells – white blood cells that normally produce antibodies to fight infection. The study measures the difference in life expectancy for patients treated by doctors with varying degrees of experience with the disease.

“Studies on cancer surgery have shown the more experience the center or practitioner has, the better the outcome,” states study author Ronald Go, M.D., a hematologist and health care delivery researcher at Mayo Clinic. “It is very difficult to be proficient when doctors are seeing only one or two new cases of multiple myeloma per year. We wanted to see if volume matters when it comes to nonsurgical treatment of rare cancers such as multiple myeloma.”

These findings previously were presented at the American Society of Hematology Annual Meeting in December 2015.

This study was made possible by the Mayo Clinic Robert D. and Patricia E. Kern Center for the Science of Health Care Delivery. The center’s goal is to uses data-driven science to improve the quality, safety and value of health care, and create better patient experiences. Dr. Go is a Kern Health Care Delivery Scholar in the center. Additional support came from the Eagles Cancer Research Fund Pilot Grant, Mayo Clinic Cancer Center, and the Division of Hematology.

http://newswise.com/articles/mayo-clinic-study-shows-that-choice-of-medical-center-impacts-life-expectancy-of-multiple-myeloma-patients
Posted by Dom and Nan at 2:26 PM No comments: 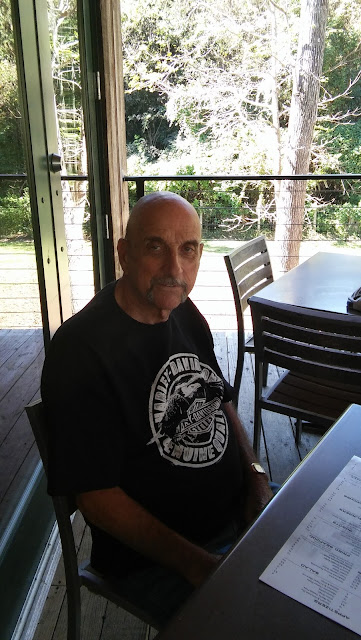 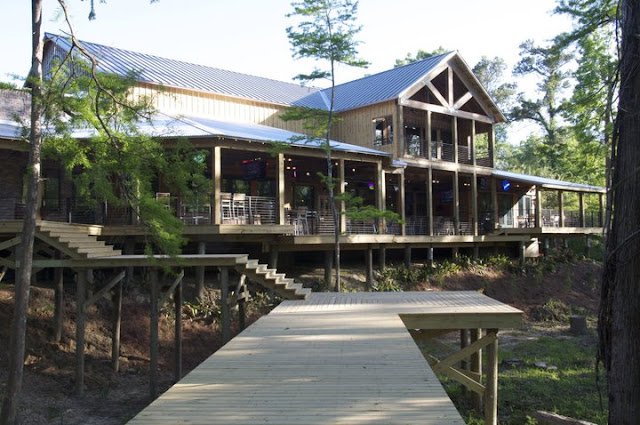 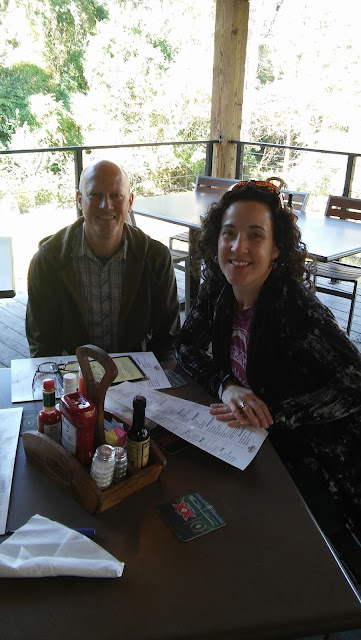 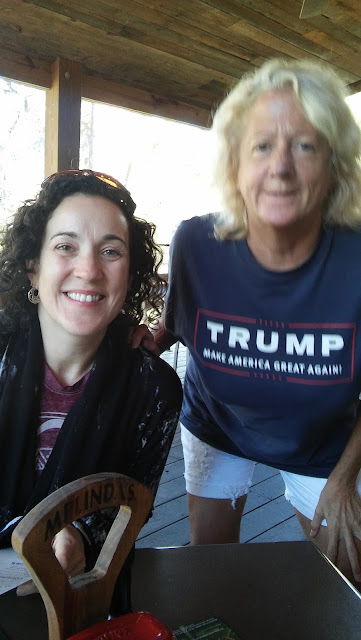 Stopped here on the way home after picking up "the kids" in the French Quarter.  Lovely place with great food! 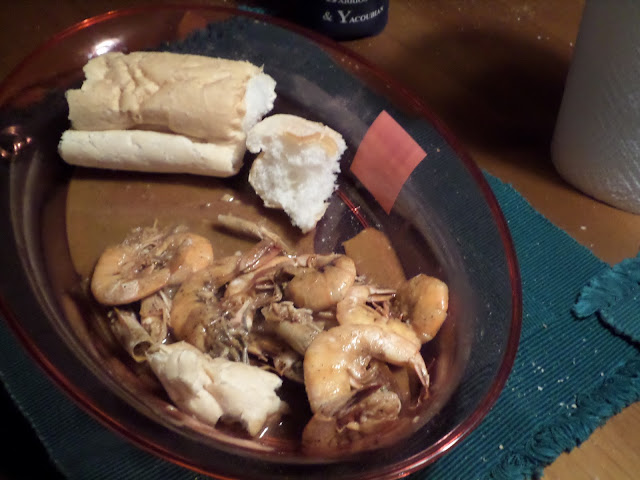 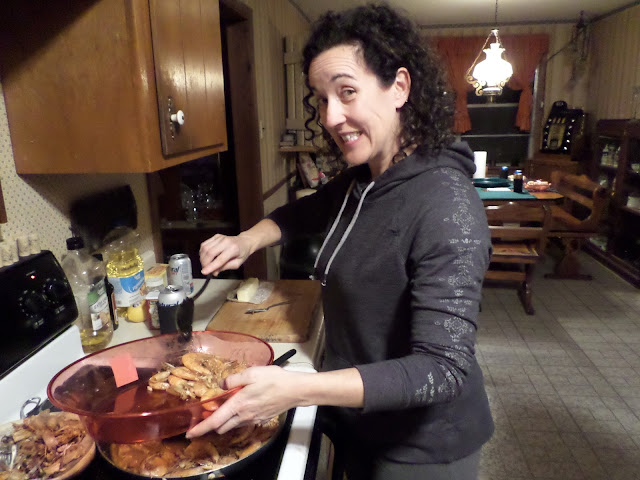 1. Rinse the shrimp and shake the excess water from them. Put them in a large skillet (or two) over medium heat, and pour the lemon juice, wine, Worcestershire, and garlic over it. Bring the liquids in the pan to a light boil and cook, turning the shrimp over with a spoon every two minutes or so, until all the brown-gray color in the shrimp is gone. Don’t overcook! At the first moment when you think the shrimp might be done, they will be: lower the heat to the minimum.

2. Cover the shrimp with a thin but complete layer of black pepper. You must be bold with this. When you think you have enough pepper in there, you still need a little more. Add the paprika and salt.

3. Cut the butter into tablespoon-size pieces and distribute over the shrimp. With a big spoon, turn the shrimp over. Agitate the pan as the butter melts over the shrimp and emulsifies into the liquid at the bottom of the pan. When no more solid butter is visible. Remove the pan from the burner.

4. Serve the shrimp with lots of the sauce in bowls. Serve with hot French bread for dipping. Also plenty of napkins and perhaps bibs.

A Fun Visit With Our Christine and Troy 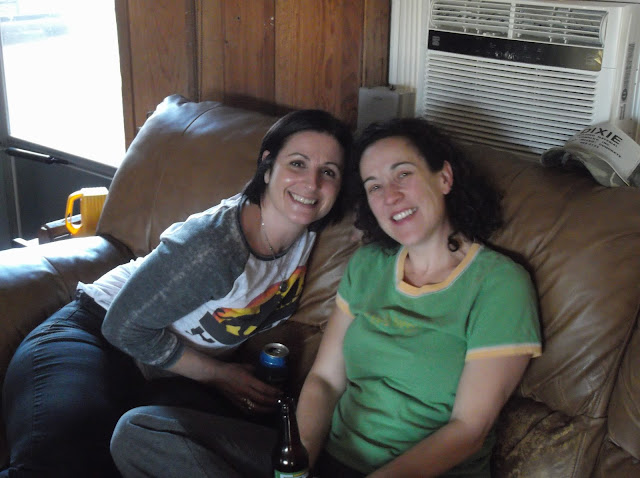 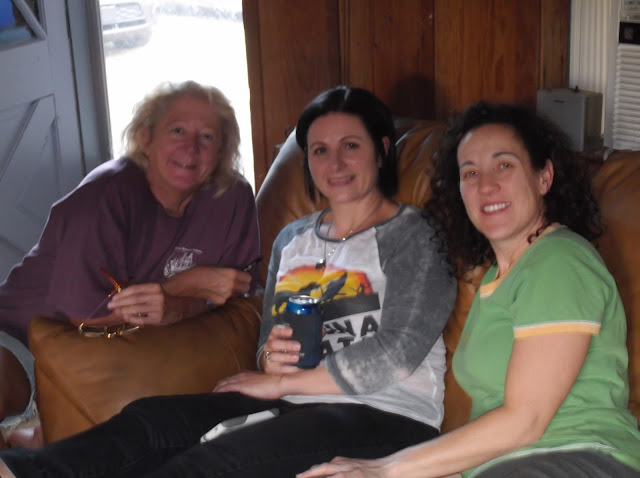 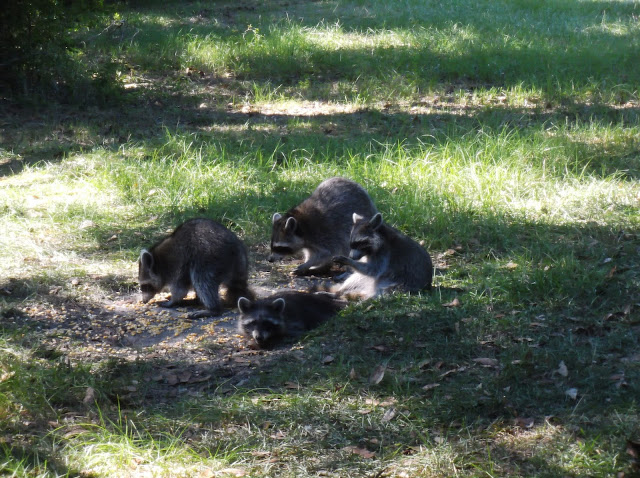 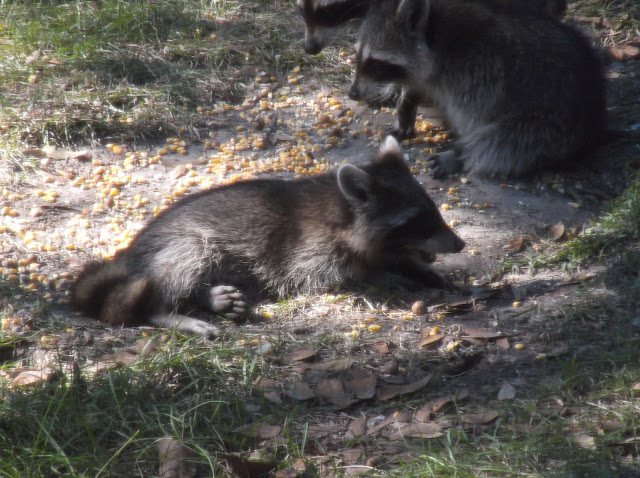 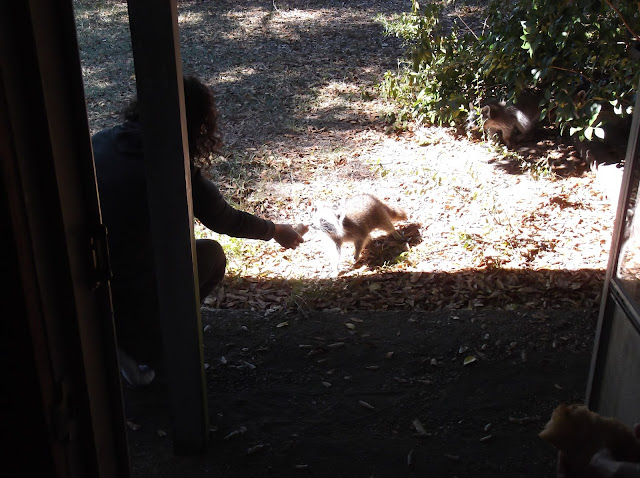 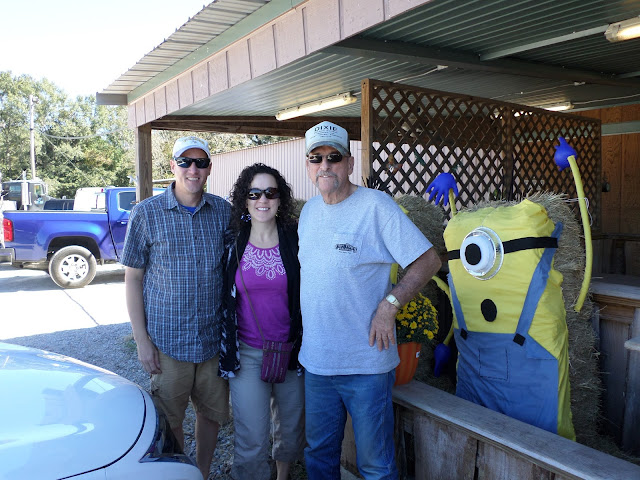 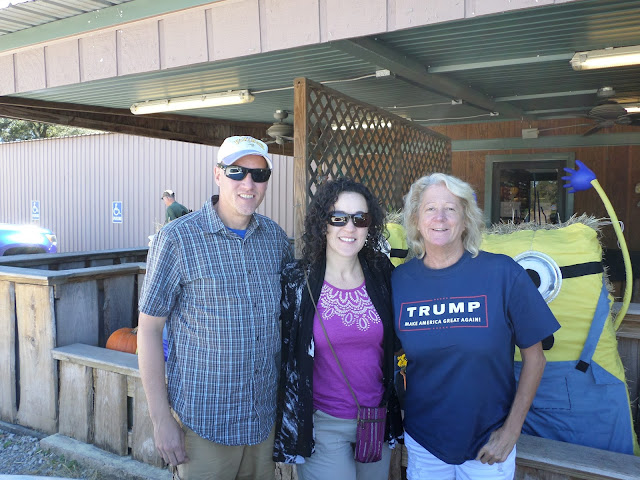 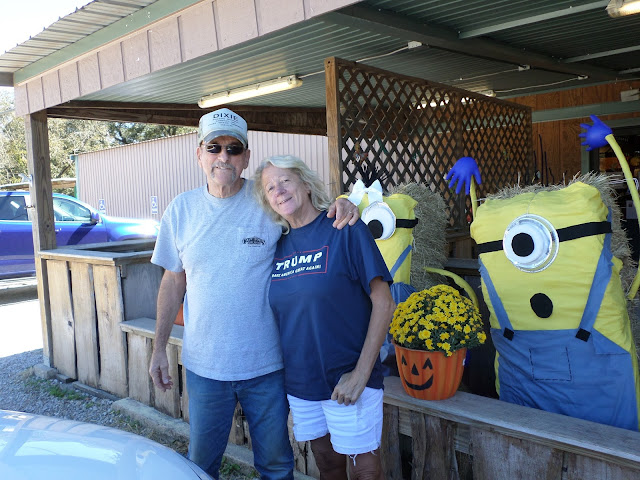 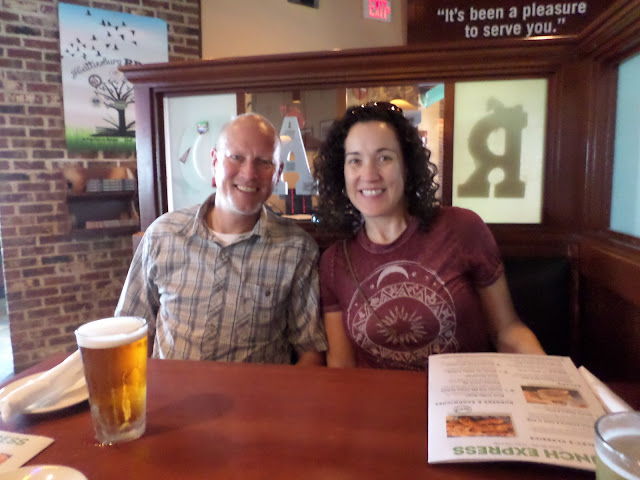 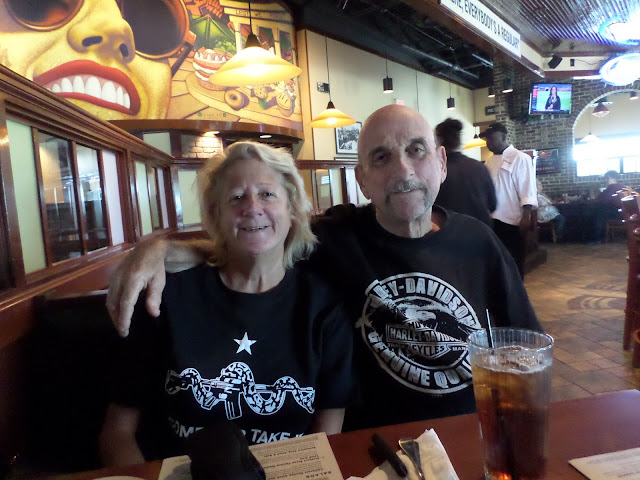 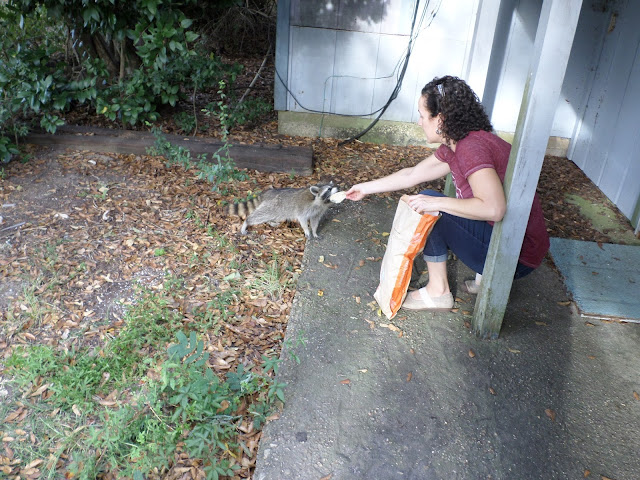 We have been going non-stop for weeks....  Last Thursday, Christine and Troy flew into NOLA and stayed overnight in the French Quarter.

We picked them up on Friday, did some grocery shopping, then went to The Chimes in Covington for lunch.

Saturday we had lunch at Crossroads Seafood down the road.

On Sunday, her pal Nicole came over for the night.  I made about 4 pounds of BBQ Shrimp.

Monday, we took a drive up to Hattiesburg and had lunch at O'Charley's.

Dropped them off at the airport on Tuesday.

Your Guide to a Non-GMO Halloween

LINK
Posted by Dom and Nan at 4:27 PM No comments:

We had an appointment with a Slidell Cardiologist.  Dr. B.

Nice, friendly staff, we were crazy about his Nurse Practioner, and we both very much liked him.

False alarm on the Left Ventricle.  Doc said that it was a shadow.  Thursday's Carotid Ultrasound was fine.

Here's something odd.... Dom's always been on blood pressure medication.  Today, they had to take it 4 times.  His pressure was around 80/45!

So, we're going to stop taking one of his 2 blood pressure medications, and return to Dr. B. in 2 weeks.

Man, this has been a ROUGH year.  Thanks for all of the prayers and calls!
Posted by Dom and Nan at 2:50 PM No comments:

KENILWORTH, NJ — The New Jersey State Council of Vietnam Veterans of America met on Sunday, Sept. 18 at Kenilworth Veterans Center to raise awareness about the long-lasting impact of toxic exposure. The focus was on the effects that chemicals have had on veterans’ offspring and the illnesses and defects that many have endured. This was the sixth meeting held concentrating on this topic.

“The VA stands for ‘Veteran’s Adversary,’” LeGates said. “They’re not your friend.”

Veterans have submitted claims reporting medical conditions such as hypertension, diabetes and cancer, all which can be traced to exposure to dioxins, particularly Agent Orange. Many claims are completely dismissed. However, the effects of this chemical continue to affect generations even today.

A veteran from Pennsylvania spoke about his experience with cancer that resulted from exposure to the toxin. When his left leg swelled twice its normal size, his doctor discovered that he had a tumor in his abdomen. There was no genetic predisposition to cancer in his family, and the only cause found was exposure to Agent Orange. His daughter is afraid to marry and have a family due to the fear that this chemical will have an impact on her unborn fetus. The veteran’s grandson was born with attention deficit disorder and anger management issues. The VVA’s goal is to pass a bill that would ban the government from using this lethal chemical.

“The chemical was sprayed along mangroves to open the field of fire in order to discover where the enemy was hiding,” Eckstein told LocalSource.

Paul Sutton, of the Dioxin Committee, further explained the history of Agent Orange. It was invented in 1922 and sprayed on the ground and in the air from 1961 to1971. Three billion veterans in Vietnam were exposed to it, as well as the civilian population.

“The chemical was tested between 1940 to 1960,” Sutton said. “The government wanted a certain amount of it sprayed in San Francisco and heated up the process to meet the requirements. This was when the chemical became its most lethal. People could be exposed just by spending time in an area where it was once sprayed. Twelve to fourteen different dioxins can be found in industrial areas such as New Jersey. Years after being exposed, it can still be detected in the blood stream.”

Sutton conducted a question-and-answer session, which included questions about the Blue Water Navy and their exposure to the chemical. There was also information given about how to submit a claim regarding medical issues related to exposure.

“It’s important to make sure that anyone who sees a doctor for an illness related to exposure of this dioxin tell the doctor to make note of it,” said State Service Officer Margaret Wojciechowicz. “This note can then be submitted to the government by a state service officer such as myself,”

Just Got a Disturbing Phone Call regarding Dom

Dom has been feeling extremely lethargic for a few weeks.  Dizzy spells and very little energy.

He sent us to a Cardiologist for a Nuclear Stress Test on Tuesday.

Dr. C's office just called to say that Dom had to get back to the Cardiologist.  He has a blocked Left Ventricle.  We have an appointment for next Tuesday morning.

I immediately did some quick research.

ISCHEMIC HEART DISEASE Veterans who develop ischemic heart disease and were exposed to Agent Orange or other herbicides during military service do not have to prove a connection between their disease and service to be eligible to receive VA health care and disability compensation. -

So.... Agent Orange quite possibly raised it's ugly head yet AGAIN.
Posted by Dom and Nan at 3:40 PM No comments: